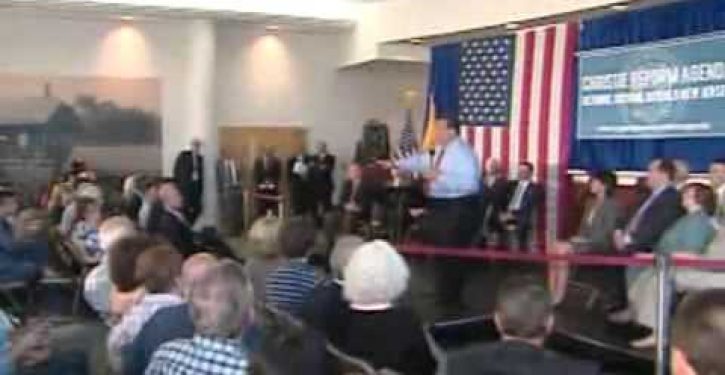 The head of New Jersey’s biggest teachers union is calling for Gov. Chris Christie’s head after he said the union’s national counterpart deserved a “punch in the face.”

Christie was appearing on CNN’s “State of the Union” show for an interview Sunday with host Jake Tapper. Tapper brought up Christie’s routine suggestion that some of his enemies in New Jersey needed a shot to the mouth.

They’re not for education for our children. They’re for greater memberships, greater benefits, greater pay for their members. And they are the single most destructive force in public education in America. I’ve been saying that since 2009. I’ve got the scars to show it. But I’m never going to stop saying it, because they never change their stripes.

Christie also rebuked the union for already endorsing Hillary Clinton more than 16 months before the election, a decision that has even drawn criticism from other major unions.

Now the head of New Jersey’s AFT branch, the New Jersey Education Association (NJEA), says Christie’s comment was so offensive he should “resign as governor immediately.”

“Chris Christie’s instinct is always to threaten, bully and intimidate instead of build consensus and show true leadership,” said NJEA president Wendell Steinhauer. “Chris Christie has no credibility as a leader and he is an embarrassment to New Jersey. Our citizens deserve so much better. Even worse, he is a terrible role model to the children that our members work so hard to protect, nurture and educate.”

Christie has had a particularly adversarial relationship with unionized teachers in New Jersey, particularly on the issue of teacher pensions, as the question of how to fund pensions going forward without bankrupting the state has proven extremely contentious. Christie has frequently gotten in intense verbal spats with teachers at town hall events, creating videos that attracted thousands of views and helped to enhance his national reputation in his early years as governor.

Christie has not given any indication he plans to meet Steinhauer’s demand.

Cartoon of the Day: Taking a break
Next Post
Report: Marilyn Mosby derailed program to analyze why homicides have increased in Baltimore