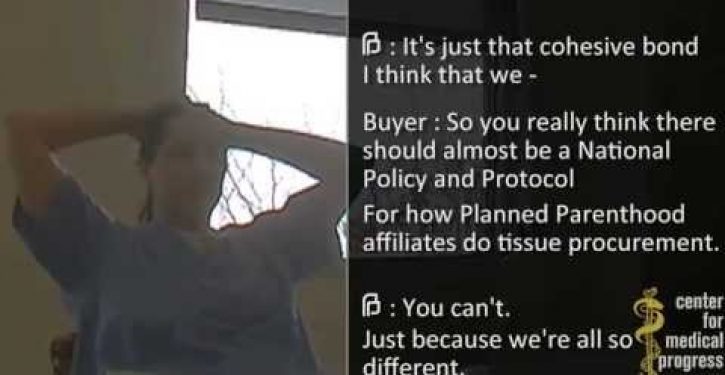 One of those nine was released early this morning. It circumvents the court order insofar as it contains no images or words of StemExpress personnel. It does, however, contain shocking new footage.

“We don’t want to get caught selling fetal body parts,” Planned Parenthood of the Rocky Mountains Vice President and Medical Director Dr. Savita Ginde says at one point in the video, which appears below. The context clarifies that Ginde was not rejecting the notion of selling pieces of aborted fetuses. Rather, she was assuring buyers that her lawyers would structure a deal correctly.

Once again, actors posing as representatives from a human biologics company meet with a Planned Parenthood director to discuss the harvesting of fetal organs. When the actors request intact fetal specimens, Ginde responds, “Sometimes, if we get, if someone delivers before we get to see them for a procedure, then we are intact.”

Since PPRM does not use digoxin or other feticide in its second trimester procedures, any intact deliveries before an abortion are potentially born-alive infants under federal law (1 USC 8).

“We’d have to do a little bit of training with the providers or something to make sure that they don’t crush” fetal organs during seconnd trimester abortions, says Ginde, brainstorming ways to ensure the abortion doctors at PPRM provide usable fetal organs.

The sale or purchase of human fetal tissue is a federal felony punishable by up to ten years in prison or a fine of up to $500,000 (42 U.S.C. 289g-2). Federal law also requires that no alteration in the timing or method of abortion be done for the purposes of fetal tissue collection (42 U.S.C. 289g-1).

When the buyers ask Ginde if “compensation could be specific to the specimen?” she agrees. Later on in the abortion clinic’s pathological laboratory, standing over an aborted fetus, Ginde responds to the buyer’s suggestion of paying per body part harvested, rather than a standard flat fee for the entire case: “I think a per-item thing works a little better, just because we can see how much we can get out of it.”

Before watching the video, be warned that the last two minutes are quite graphic.