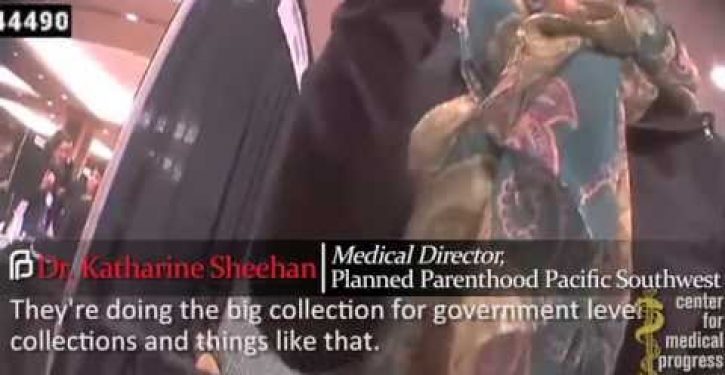 O’Donnell, who is a licensed phlebotomist (someone who draws blood), explains that she unsuspectingly took a job as a “procurement technician” at the fetal tissue company and biotech start-up StemExpress in late 2012.

“I thought I was going to be just drawing blood, not procuring tissue from aborted fetuses,” says O’Donnell, who fainted in shock on her first day of work in a Planned Parenthood clinic when suddenly asked to dissect a freshly-aborted fetus during her on-the-job training.

For six months, O’Donnell’s job was to identify pregnant women at Planned Parenthood who met criteria for fetal tissue orders and harvest the fetal body parts after their abortions. O’Donnell describes the financial benefit Planned Parenthood derived from its arrangement with StemExpress:

For whatever we could procure, they would get a certain percentage. The main nurse was always trying to make sure we got our specimens. No one else really cared, but the main nurse did because she knew that Planned Parenthood was getting compensated.

The video also shows Vice President and Medical Director of Planned Parenthood of the Rocky Mountains (PPRM) in Denver Dr. Savita Ginde. PPRM is one of the largest and wealthiest Planned Parenthood affiliates and operates clinics in Colorado, New Mexico, Wyoming, and Nevada. Standing in the Planned Parenthood abortion clinic pathology laboratory, where fetuses are brought after abortions, Ginde concludes that payment per organ removed from a fetus will be the most beneficial to Planned Parenthood: “I think a per-item thing works a little better, just because we can see how much we can get out of it.”

Dr. Katherine Sheehan, medical director emerita of Planned Parenthood of the Pacific Southwest in San Diego, describes her affiliate’s long-time relationship with Advanced Bioscience Resources, a middleman company that has been providing aborted fetal organs since 1989:

We’ve been using them for over 10 years, really a long time, you know, just kind of renegotiated the contract. They’re doing the big government-level collections and things like that.

“Planned Parenthood’s sale of aborted baby parts is an offensive and horrifying reality that is widespread enough for many people to be available to give first-person testimony about it,” notes David Daleiden, Project Lead for The Center for Medical Progress.

CMP’s investigative journalism work will continue to surface more compelling eyewitness accounts and primary source evidence of Planned Parenthood’s trafficking and selling baby parts for profit. There should be an immediate moratorium on Planned Parenthood’s taxpayer funding while Congress and the states determine the full extent of the organization’s lawbreaking.

This video will make you sick, not simply for the callous way in which baby parts are discussed, but for the graphic images and most of all just the concept. At one point in the video, technicians are shown picking apart a fetus in a petri dish and talking about the money they receive for each saved part.

Think about this for a moment. If a veterinarian killed puppy fetuses, and carefully picked which part of their bodies to crush so he could save the others for scientific research, furious liberals would stage a massive demonstration at the National Mall about five minutes after the news was leaked.