These are the top five other than the fact that it’s not a deal; it’s a surrender.  The West has agreed to lift the sanctions on Iran.  Iran has not agreed to give up anything she needs to acquire a bomb, or cease any of her aggressive behavior (e.g., arming and training Hezbollah and Hamas, fighting wars in Syria, Iraq, and Yemen).  Not one of these things – not one – is a measure of performance Iran will actually have to demonstrate to get the sanctions lifted.

1.  The agreement paves Iran’s path to the bomb.  The only question about Iran and the bomb now is when Iran will get it.  If Iran adheres to the terms of the Joint Comprehensive Plan of Action (JCPOA) agreement (link to full text here), she will retain the means, and improve the expertise, to build nuclear weapons throughout the next 10 years.  She would wait for that 10 years to pass, however, before enriching enough uranium to test a warhead and stockpile weapons.

But Iran’s adherence to the terms of the JCPOA is unverifiable.  There cannot be any intrusive “snap” inspections; there can only be inspections of what Iran allows to be inspected, at times of Iran’s choosing.  If Iran wants to operate more centrifuge cascades than stipulated in the agreement, or install and operate new-generation centrifuges, the only obstacle is deciding on a place to do that, unmonitored by the IAEA.  The same is true of every other stage of uranium processing or bomb building (including all aspects of warhead development, which are entirely unaddressed by the JCPOA).

Iran could “break out” in as little as 3 months, as things stand today, and nothing in the JCPOA agreement will stop her.

2.  The agreement unleashes money and trade for Iran, which will allow her to arm and finance her already aggressive, disruptive foreign policy.  The so-called “signing bonus” of $150 billion in released funds is just the beginning.

The JCPOA begins to relieve Iran of the clamps on her economic activity within months.  Two provisions written into the JCPOA are of particular note: the requirement that the P5+1 get the UN sanctions regime lifted as soon as the agreement is formalized; and the plan for President Obama to begin waiving U.S. sanctions – even if Congress hasn’t lifted them – once IAEA certifies that Iran has complied on paper with a short list of administrative requirements.

Iran doesn’t have to comply with any of the red lines described by Obama in April, or even be on the path to complying with them, in order for sanctions to be lifted.  The red lines were all conceded by the U.S. in the “negotiations.”

3.  The agreement puts a seal on a disturbingly unbalanced U.S. approach to Middle Eastern security.  Instead of offering radical Shia Iran a way to merit full participation in a multilateral region, this agreement favors Iran over the major Sunni nations – Turkey, Saudi Arabia, Egypt, Jordan – and the Western-oriented Jewish state of Israel.

The agreement is actually quite remarkable in this regard.  The United States, to an even greater extent than our European allies, has for decades had special partnerships with Israel and the major Sunni nations.  Egypt is the late-comer, in fact: a key Soviet client until the peace treaty with Israel in 1979.  Our long partnerships with these nations weathered the extraordinary upheavals of 1991 and the years following.

But the partnerships began to fray after the Arab Spring in 2011.  The Obama administration has been unfriendly to attempts at stabilization by non-radicalized Sunni actors (e.g., al-Sisi in Egypt, Saudi efforts to counter Hezbollah in Lebanon).

And now, Obama is concluding an agreement with Iran that will enable Iran to more rapidly and aggressively threaten the security of our long-time friends in the region.  The Arab nations have expressed particular concern about that, along with the expected concern of Israel.  Astonishingly, these nations’ chief patron has made an agreement gravely prejudicial to their interests, with the most aggressive, disruptive state in the region.

4.  The agreement thus will destabilize the Middle East further.  It will spark an accelerated conventional arms race, as the regional nations seek to outpace an unleashed Iran.  It will drive more nations to seek nuclear weapons.

It will make an Israeli attack on Iran’s nuclear program – with the attendant consequences – much more likely.

It will undermine the security assumptions of everyone in the region.  Israel’s basis for security will be eroded, but so will Saudi Arabia’s, Jordan’s, and Egypt’s.  The regional dynamics are about more than whether and when Iran has a bomb.  They are about Iran’s ability to foment instability, fight proxy wars, and menace territory further and further abroad.  These capabilities will all grow significantly with the release of sanctions.

But Iran’s increased ability to consolidate gains close by – e.g., in Iraq and Afghanistan – will also change the security calculations of Turkey and Pakistan.  All the old patterns of confrontation in the region will reassert themselves, garbed in modern technology.

Unleashing a radical Iran, as a geopolitical instigator, is about much more than the bomb.  And that’s exactly what the Obama agreement is set to do.

5.  The agreement will undermine one of the core pillars of modern NATO policy.  This aspect of the matter has gotten little play in the Western media, but it is of profound importance to Western security.

Russia has already framed the point in the way most favorable to her desires.  Within hours of the JCPOA being announced, Foreign Minister Sergei Lavrov was telling Russia media that the agreement would obviate the need for NATO to deploy missile defenses to Eastern Europe.

This has been a Russian refrain for the last six years, with the Russians referencing Obama’s speech in Prague in 2009 in which he called for the full elimination of nuclear weapons.  Obama cited a nuclear-armed Iran as the concern driving the NATO missile defense policy.  But he also reportedly sent Dmitry Medvedev a secret letter early in 2009 in which he offered to back off entirely from the NATO missile defense plan if Russia would help prevent Iran’s nuclearization:

The letter to President Dmitri A. Medvedev was hand-delivered in Moscow by top administration officials three weeks ago. It said the United States would not need to proceed with the interceptor system, which has been vehemently opposed by Russia since it was proposed by the Bush administration, if Iran halted any efforts to build nuclear warheads and ballistic missiles.

Obama went ahead after this overture with a revised missile defense plan that focused exclusively – unlike the Bush plan – on defending Europe against Iranian missiles, while providing no defense for North America.  The Obama plan is in execution, in fact, with missile defense ships now permanently homeported in Spain, and preparations being made for land-based elements to be deployed in Romania and Bulgaria.

Russia continues to vehemently oppose all these measures.  And it’s a legitimate question how NATO should now review its missile defense policy – if, as Obama will argue to his Congress, the JCPOA with Iran will in fact prevent Iran, for the next decade, from menacing Europe as well as the U.S. with nuclear missiles.

Missile defense against an Iranian threat is not a minor feature of NATO policy.  It’s a baseline aspect of NATO’s view of alliance security.  What happens to this policy feature, now that the JCPOA is here?  There is little evidence that the alliance, or the Obama administration, has planned to deal with the question.  But Russia will be pushing aggressively on it, and will stake her own policies on the argument than any continuation now of theater missile defense plans is directed exclusively, and prejudicially, at Russia.

It is easy enough to say – and the U.S. and NATO will say it at first – that signing the JCPOA doesn’t materially change how Iran figures in the core security assumptions of the West.  But point by point, this claim will be assailable, and Russia is already preparing the assault.

European nations are preparing, in their turn, to establish more normal relations with Iran once the sanctions are lifted – a process that will not domesticate Iran but rather will involve the Europeans in the conflicts of the Middle East, in a return to the patterns of the pre-1939 era.  China, India, and Japan will all get their licks in as well, along (of course) with Russia, which is already a major player there.

The Obama agreement with Iran is about much more than a bomb.  Its effect will be to transform the Middle East irrevocably away from the era of U.S.-dominated stability.  There is really nothing else that could so neatly hack all the legs off of the last 40 years of U.S. policy in the region.  The world will not look the same a year from now. 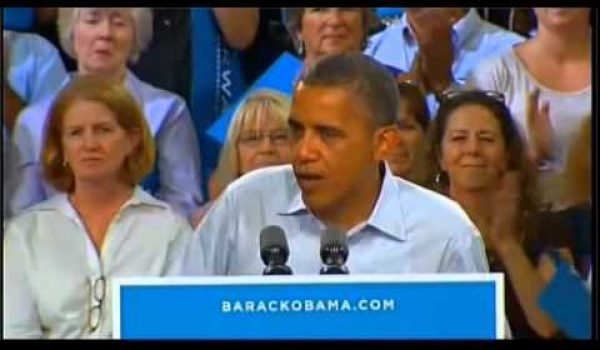 Why is this store taking flak for its sign, which some claim is ‘controversial’?
Next Post
Flashback: WH spox claim ‘We never sought anytime/anywhere inspections’