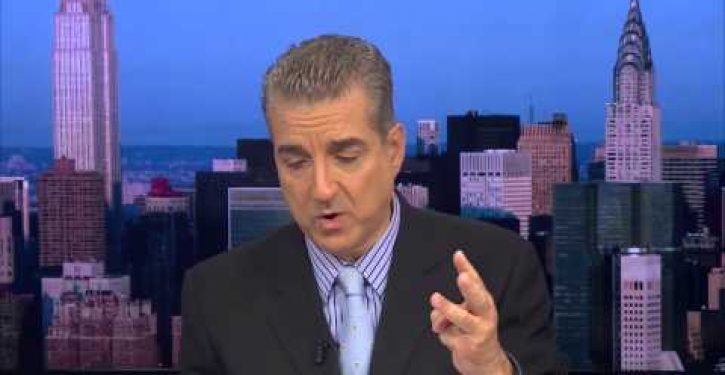 Team Hillary is getting a bit testy. Not only is an aged socialist ruining Clinton’s strategy of faking to the middle, but she finally gave those dammed media vultures their pound of flesh (aka, agreed to be interviewed), and now the vast right-wing conspiracy is hounding her over her “truthful” statements. One of those was her claim that she “never had a subpoena,” an assertion that Republican congressman Trey Gowdy immediately exposed as a lies by proving that she received three (count ’em, 3) subpoenas — two issued way before she was able to destroy evidence.

An indication of how much of a strain the third degree is imposing on Hillary’s handlers came yesterday when longtime Clinton insider Lanny Davis agreed to appear on Steve Malzberg’s show on Newsmax TV. Malzberg, for those unfamiliar with his work, is a no-nonsense interviewer, a man who refuses let his guests get away with spin.

As soon as Davis phoned into the show, Malzberg hit him with the question of the day: “Why did she say she never got a subpoena?”

OK she said she never got a subpoena in the context of the question of whether she had subpoenas prior to her delivering the emails to the State Department. That was the question she answered. A time specific answer. She had not gotten a subpoena at that time. She probably misunderstood that it would be interpreted this way. But knowing [committee chair] Trey Gowdy, who’s never answered the question “Why won’t you call her publicly to testify, why won’t you release the transcript of [Clinton friend] Sidney Blumenthal’s deposition?” That’s what we should be talking about.

Malzberg shot back, “I don’t really care about that, we’re here to talk about Hillary.”

Davis became a bit argumentative: “Well, what I care about is telling you the answer that I choose to answer, not the one that you want me to. I gave you the answer.”

Malzberg restated his question about the subpoena. Davis repeated his non-answer:

I hate to do this to you because you’ve usually been pretty civil and fair, you said you were going to start with a question and answer … and then what you did is played a clip of her answer — exactly what Trey Gowdy has done and this is Steve Malzman  [sic] at his worst.

She answered a question that was about a moment in time when she had not turned over her emails to the State Department and there was so subpoena at that moment.

Malzberg responded with a taunt: “So it depends on the meaning of the word ‘is,’ right Lanny?”

At this juncture, Davis said the interview was “over” and it would be the “last time.” Seconds later, he hung up.

“This is pathetic, really pathetic,” said Malzberg, who then replayed Clinton’s claim on CNN.

The video that follows contains Gowdy’s statement and Davis’s dance around the truth.

JV blues — why Islamic State is still winning
Next Post
How far is the left willing to go to create racial tensions? See for yourself