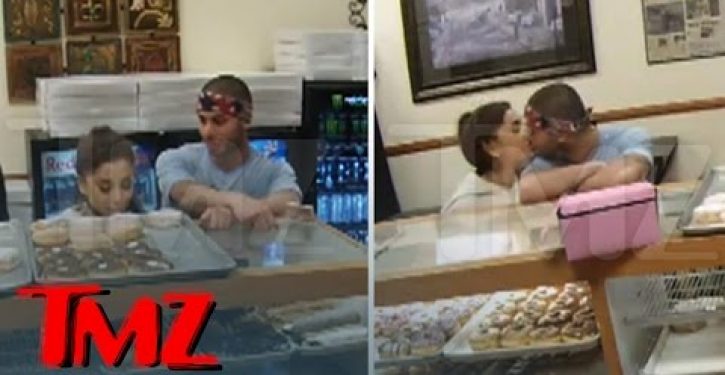 I always seem to be the last to know.  I finally got it figured out (sort of) what a “Kardashian” is, and now there’s someone I’ve never heard of named Ariana Grande, showing up down the road from me licking the doughnuts displayed for sale in a doughnut shop, while trash-talking America.

Apparently Ms. Grande is a pop singer.  I don’t know why she was in Lake Elsinore, California, in a doughnut shop, but that’s where she was, with her boyfriend, when she licked the doughnuts on the display trays, and uttered the now-deathless words “I hate Americans.  I hate America.”  She and her boyfriend spat on some doughnuts too.  This was all caught on surveillance video.

A feral cat has better manners, but that didn’t daunt Susan Sarandon.  When she heard about this event, publicized by TMZ, she perpetrated our Tweet of the Day, urging her followers to all go lick a doughnut in solidarity. (H/t: Breitbart)

Today, lick a doughnut in solidarity with @ArianaGrande. A sweet, talented, true American. ???

The hard-working small business owners and employees in the doughnut-shop trade – who typically start their days around 3:00 or 4:00 AM – would probably take a different view.

The owner of Wolfee Donuts in Lake Elsinore certainly would.  He took the surveillance video of the incident to the Riverside County Sheriff, to find out if there was a basis for charges against Grande and her boyfriend.  The county’s verdict was that the doughnut shop itself would be downgraded in its health rating, for failing to have “food separated and protected from contamination.”

Before you agree with the county and get all judgmental about the doughnuts on trays on top of the counter (which the owner said was a temporary condition anyway, while an employee was restocking the display case), remember that all self-serve pastry displays with front doors can be accessed by licking and spitting customers.  Thousands of chain grocery stores and corner pastry shops across America have them.  Yet those displays apparently meet health department standards.

If you can’t find a doughnut shop with doughnuts out on a tray, just go to the Wal-Mart bakery department and stick your head in the self-serve pastry display case.  You’ll find plenty of doughnuts to lick there.  Of course, Susan Sarandon is already over it.  She’s moved on, and she wishes you would too.

For all you concerned about #DonutGate, I suggest you Google Roundup, Monsanto & GMOs & put your angst into something really threatening.