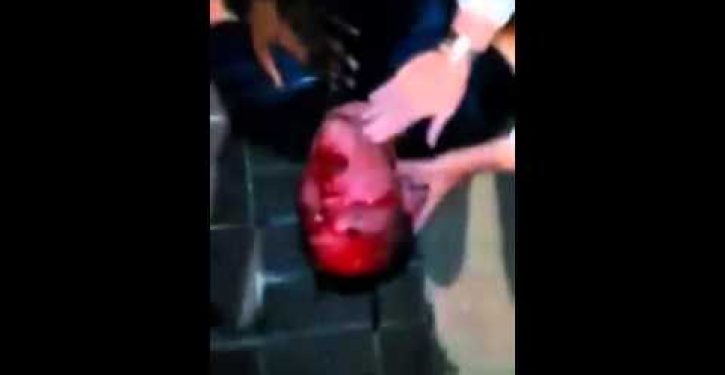 At first the Cincinnati Police Department labeled the near-deadly Fourth of July beating of a white man by a black mob an “anti-white” crime. It seemed as though authorities were leaning toward calling it a “hate crime” but couldn’t quite bring themselves to utter the phrase. No matter. They have now backed away from calling it even that.

From the Cincinnati Enquirer:

Police backed away Monday from an officer’s incident report that described the Saturday night assault on a man near Fountain Square as an “anti-white” crime.

In a police incident report filed at 3 a.m. Sunday, the reporting officer stated the assault that left Christopher McKnight, 27, bloodied and unconscious involved hate or bias. The officer’s typed explanation was that the violence was “anti-white.”

At a Monday afternoon news conference with other police and city leaders, Capt. Mike Neville said that description was incorrect.

It is too early in the investigation to determine whether race motivated the assault, Neville said.

But the aftermath of the beating, captured on video and uploaded to Facebook, shows a crowd of onlookers taunting the bloodied and apparently unconscious figure stretched out on the pavement. In the footage, which follows (warning: graphic content and language), one woman can be heard declaring jubilantly, “Yea, n***a, you just got knocked the f**k out!”

The Enquirer article notes that the video does not show the assault itself, which is correct, but the behavior of those assembled should nevertheless appall anyone who watches it. At one point, someone in the group suggests calling 911, but even that is treated with the same depraved indifference and jocularity.

According to NBC affiliate WLWT McKnight sustained a a broken nose, concussion, and facial contusions after “multiple subjects jumped on and assaulted” him “during an unruly crowd situation stemming from Fountain Square event.”