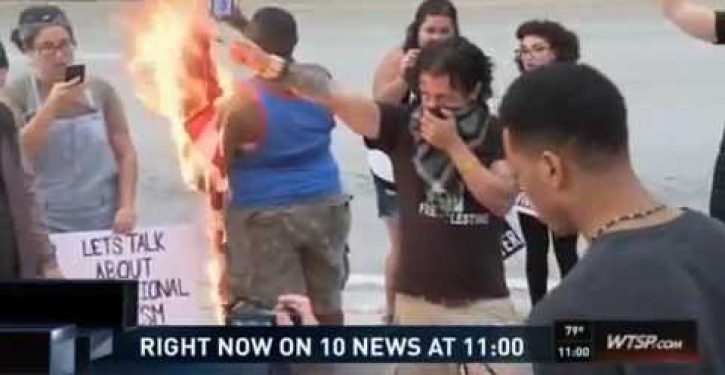 While chanting “black lives matter” and “end racist violence,” a group of predominantly white protesters in Tampa demonstrated that actions speak louder than words by setting fire to a flag that some view as a symbol of racist oppression. No, I am not referring to the Confederate flag, though they eventually got around to immolating one of those, too. Rather, the flag torched was the Stars and Stripes — and just in time for the nation’s birthday.

CBS affiliate WTSP notes that the event was organized by the group Raíces en Tampa, which promotes the rights of Tampa’s Latin community. Alekos Zambrano, a spokesman for the group, said of the flag burning:

I’m not sure what message that sent. We just organized the event to make sure people came here and had an outlet to express themselves. We didn’t plan every detail.

But Jesse Nevel of the Uhuru Solidarity Movement — which describes itself as an “organization of white people working” in “solidarity with the self-defined struggle of African people for liberation” — was less conflicted, telling reporters:

To us the Confederate flag and the American flag, those represent the same thing which is that this country, this social system was built on slavery and genocide.

Elsewhere in his remarks Nevel  called Old Glory “a piece of sh*t.”

The demonstration was reportedly also intended air a list of demands to the City of Tampa. There were three in all. The first was to tear down the confederate flag displayed at one prominent intersection. The second was to rename Robert E. Lee Elementary School, while the third was to investigate stops involving black bicyclists.

Sadly, no one with the WTSP news team thought to ask any of the protesters what they hope to be when they grow up.

Image of the Day: Taunting Christians as a show of ‘tolerance’
Next Post
Darwin Award contender dies by setting off fireworks from top of head