The Supreme Court’s June 25 decision in Texas Dept. of Housing and Community Affairs v. Inclusive Communities Project creates confusion and uncertainty in multiple respects. In a 5-to-4 decision, the Court ruled that the Fair Housing Act bans certain landlord rental practices and local housing regulations that are racially neutral and nondiscriminatory on their face, if they have a “disparate impact” on a minority group, by excluding minorities at a higher rate than whites, and thus causing a racial imbalance deemed statistically significant.

In creating such a “disparate impact” prohibition, it failed to follow longstanding principles of statutory construction. And it also failed to provide meaningful guidance about what rises to the level of illegal “disparate impact.” This deeply myopic ruling will have many perverse consequences, as lawyer Paul Mirengoff explains in the article, “In housing case, Justice Kennedy’s eyes are wide shut.”

In lacking any reference to “disparate impact,” the Fair Housing Act is quite unlike the workplace race and sex discrimination law, Title VII, which was expressly amended in 1991 by Congress to include “disparate impact” claims. But the Court read a ban on disparate impact into it anyway.

In so doing, it violated the basic principle of statutory construction that says that statutes, where possible, should be interpreted to avoid raising even potential constitutional problems. (This overly expansive interpretation of the Fair Housing Act also violates several other principles of statutory construction, which we discussed at this link). The Court itself admitted that “disparate impact” liability, through its focus on racial balance, can sometimes lead to quotas or other unconstitutional uses of race. And in past decisions, it had stated that “racial balancing” is “patently unconstitutional.” See Fisher v. University of Tex. at Austin (2013).

As the dissent observed, “The Court acknowledges the risk that disparate impact may be used to ‘perpetuate race-based considerations rather than move beyond them.’ … And it agrees that ‘racial quotas … rais[e] serious constitutional concerns.’ Yet it still reads the FHA to authorize disparate-impact claims. We should avoid, rather than invite, such ‘difficult constitutional questions.’ … By any measure, the Court today makes a serious mistake.”

The dissent was right: the Court did make a mistake. In past decisions, the Supreme Court has declined to read federal civil-rights statutes expansively—such as mandating racial proportionality—when doing so would lead to even potential constitutional problems. For example, in Miller v. Johnson (1995), the Court noted that “although we have deferred to the [Justice] Department’s interpretation in certain statutory cases … we have rejected agency interpretations to which we would otherwise defer where they raise serious constitutional questions … When the Justice Department’s interpretation of the Act compels race-based districting, it by definition raises a serious constitutional question … and should not receive deference.” Similarly, in Northwest Austin Municipal Utility District No. 1 v. Holder (2009), the Supreme Court construed provisions of the Voting Rights Act quite narrowly to avoid possible constitutional federalism problems.

But here, it declined to do so, even though it admitted that “Remedial orders” in disparate impact cases “that impose racial targets or quotas might raise more difficult constitutional questions” and thus should presumably be avoided.

It also admitted that “without adequate safeguards … disparate-impact liability might cause race to be used and considered in a pervasive way and “would almost inexorably lead” governmental or private entities to use ‘numerical quotas,’ and serious constitutional questions then could arise…. The litigation at issue here provides an example. From the standpoint of determining advantage or disadvantage to racial minorities, it seems difficult to say as a general matter that a decision to build low-income housing in a blighted inner-city neighborhood instead of a suburb is discriminatory, or vice versa. If those sorts of judgments are subject to challenge without adequate safeguards, then there is a danger that potential defendants may adopt racial quotas — a circumstance that itself raises serious constitutional concerns.”

But it itself failed to provide such safeguards in the form of clear guidance about what rises to the level of illegal “disparate impact.”

Instead, it treated radically different interpretations of disparate impact liability as if they were synonymous, or at least similar. It stated that only “artificial, arbitrary, and unnecessary” selection criteria that do not advance valid purposes give rise to disparate impact claims, saying that a “plaintiff bringing a disparate-impact claim challenges practices that have a ‘disproportionately adverse effect on minorities’ and are otherwise unjustified by a legitimate rationale”; that “Disparate-impact liability mandates the ‘removal of artificial, arbitrary, and unnecessary barriers,’ not the displacement of valid governmental policies,” and that it should not “displace valid governmental and private priorities, rather than solely ‘remov[ing] … artificial, arbitrary, and unnecessary barriers.’”

But it then muddied the waters and confused things by quoting the Obama administration’s recent regulation interpreting the Fair Housing Act, under which the defendant must prove that the challenged practice “is necessary to achieve” a “substantial” interest, not merely that the practice is useful in promoting a legitimate goal. Moreover, the court suggested that “housing authorities and private developers” should “be allowed to maintain a policy if they can prove it is necessary to achieve a valid interest,” and analogized the test to the onerous “business necessity” test imposed on employers under Title VII of the Civil Rights Act, under which an employer must show that hiring criteria have a “manifest relationship” to job performance.

So the Court itself failed to provide the “adequate safeguards” it itself suggested should be a precondition for disparate impact liability.

Instead, it conflated two very different standards for disparate impact liability, the Smith and Griggs standards: first, it cited the concept of “business necessity” from the Supreme Court’s anti-business decision in Griggs v. Duke Power Co., (1971), which required employers to show a “business necessity” (not merely a legitimate reason) for a selection criterion (in that case, a high-school diploma requirement) that weeds out more blacks than whites. But it also cited the Supreme Court’s subsequent, much less anti-business decision in Smith v. City of Jackson (2005), involving the Age Discrimination in Employment Act, which merely requires an employer to show that a challenged practice serves a legitimate purpose, even when it weeds out more members of one group than another.

The Smith decision is consistent with the Supreme Court’s suggestion in its Fair Housing Act ruling that disparate-impact law only reaches selection criteria that are “unjustified by a legitimate rationale,” and impose “artificial, arbitrary, and unnecessary barriers,” not those that serve “valid governmental and private priorities.”

The Griggs decision isn’t, however (although the snippets of out-of-context quotations from Griggs quoted in the Supreme Court’s fair housing ruling largely are). The “business necessity” test of Griggs has been interpreted by lower courts as rendering illegal many sensible, legitimate selection criteria (such as requiring teachers to pass a competency test showing they can read and write at at least an 8th grade level) merely because they did not rise to the level of being essential to weed out employees who can’t function even at a rudimentary level. In their eyes, “necessity” is not shown by a mild correlation to a legitimate goal.

As the Smith case explained, “textual differences between the ADEA and Title VII make it clear that even though both statutes authorize recovery on a disparate-impact theory, the scope of disparate-impact liability under ADEA is narrower than under Title VII,” because of “the amendment to Title VII contained in the Civil Rights Act of 1991 . . . One of the purposes of that amendment was to modify the Court’s holding in Wards Cove Packing Co. v. Atonio, 490 U. S. 642 (1989), a case in which we narrowly construed the employer’s exposure to liability on a disparate-impact theory. . .While the relevant 1991 amendments expanded the coverage of Title VII, they did not amend” other statutes; “Hence, Wards Cove’s pre-1991 interpretation of Title VII’s identical language remains applicable” to such statutes like the ADEA.

And under the Smith test, which logically applies to the Fair Housing Act as well because it was not amended by the 1991 Civil Rights Act, it is enough for the defendant to show that its challenged policy serves legitimate purposes, even if an alternative policy might also do so: “Unlike the business necessity test, which asks whether there are other ways for the employer to achieve its goals that do not result in a disparate impact on a protected class, the reasonableness inquiry includes no such requirement.” 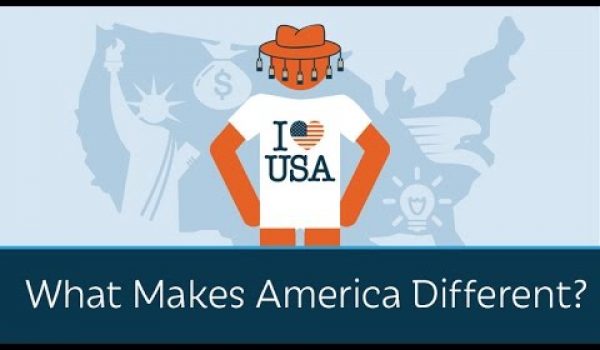 Video: Prager U asks what makes America different?
Next Post
Image of the Day: Only thing more outrageous than 3-year-old’s obscene gesture is mother’s defense