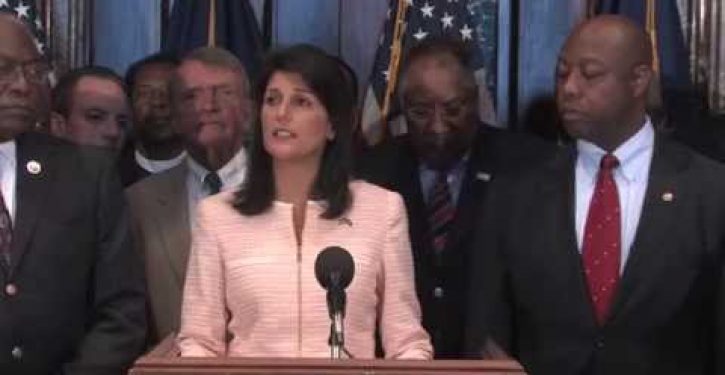 Nikki Haley had a well-managed press conference today announcing that she wants to stop displaying the Confederate battle flag on the grounds of the state capitol complex.

Her announcement speech was admirable and positive, I thought.  She didn’t impugn the motives of people for whom the flag commemorates the memories of ancestors who fell in battle in America’s most awful war.  But basically, she said it’s time for the Palmetto State to put the past behind it and move forward.

Haley is handling this correctly.  Here are some reasons why I agree with what she’s doing.

1.  She’s framing it as a policy decision about the future South Carolina wants, not a vindication that’s about the past.

This move isn’t about silencing one group at the behest of others.  It is about ceasing to showcase a symbol that black citizens may find offensive, even if not every reason for finding it offensive is legitimate.  Some reasons certainly are.  When a symbol is used repeatedly by people with extreme, hateful views, that of course doesn’t mean the symbol should be prohibited by law, or that everyone who likes the symbol is a hateful extremist.  But it does mean that such abuse of the symbol can be taken into account in decisions about whether it will be displayed on government property.

The Confederate battle flag is inherently about fighting to break up the Union and preserve the institution of slavery.  It’s useless to try to separate the two factors: except for the institution of slavery, no national issue had the divisive moral import to make secession from the Union seem necessary.  Slavery was the issue on which the Framers’ noble concept of a limited central government foundered.

The Framers’ view of the different functions of state and federal government offered only a very long-term, incremental way of ending slavery.  It turned out to be the issue for which such incrementalism was morally intolerable – and it’s hard to argue against that mindset.  State-centric federalism didn’t have the answer for slavery that met the test of conscience.

From the vantage point of 2015, we’ve seen 150 years of opportunistic demagoguery about this on all sides of the issue, with the Confederate battle flag kicked around as a political football for at least the last 50 of them.  Nikki Haley is right: it’s time to retire the battle flag from that role.  It’s not the hill to die on.

The current debate reminds me, in an important way, of a much less freighted event early in my naval service, when some junior officers thought it would be a good idea to have an officers’ costume party with a “Gone with the Wind” theme.  We had black officers in our number who didn’t think very highly of that, although they limited their reactions – like grown-up, responsible people – to merely objecting quietly to the party planners, and then not going.

I decided not to go either, although I didn’t make a big deal of it.  I did tell the party planners why I wasn’t going, when a friend who was on the planning committee asked.  I was considered a killjoy, as were the black officers.  It wasn’t important enough to get worked up about, but in my view, it did involve questions that could cause valid heartburn.  How were the black officers supposed to dress up – as domestic servants?  Field workers?  Abolitionist clergy, maybe?  That would have struck a festive note, to be sure.  What history, exactly, was to be evoked?  It would have been silly, even embarrassing, for our black officers to dress in regalia that was historically accurate only for white Southerners.

No one suggested that this event ought to be anyone’s hill to die on, and that’s a significant point.  People all had a right to their feelings and purposes, without prejudicial assumptions being made about them.

That’s why it would have been a positive step – not a reaction under duress – for a senior officer to step in and dissuade the JOs from carrying through on their plans.  No one did that at the time, but Governor Haley’s move today has the same character of being a positive policy move, rather than a defensive reaction under political duress.

2.  Losing some of the baggage from the past won’t be a bad thing.

America badly needs a return to more of the state-centric federalism the nation was founded with.  Central government that gets into every aspect of life and tries to enforce a laundry list of disputable social mores is doing irreparable harm to the protection of our natural rights, and may have already done irreparable harm to our character as a people.  Central government that imagines itself as a mechanistic “god,” reordering “income distribution” and the “climate,” is equally destructive.  Our idea of what a national government is for is appallingly distorted today, and in urgent need of a reset.

But for decades now – at least since the 1960s – the failure of federalism to resolve the question of slavery prior to 1861 has been leveraged to buy a bigger and bigger portfolio for central government.  This is partly because symbols like the Confederate battle flag can be so easily used as a shorthand to impugn the purposes of people who argue for honoring the Ninth and Tenth Amendments.

There are whole segments of conservatism – let alone the progressive left – in which arguments for federalism are heard as dog whistles that really mean “Dixie, ‘States’ Rights,’ and Segregation!”  People who hear things this way, including conservatives, are wrong, and their minds need to change.

But insisting on highly abstract or specialized reasons for a state government to fly the Confederate battle flag actively deters the change of mind such people need.

We shouldn’t see all political disputes in the terms of the Civil War.  It’s hard to think of any issue other than slavery that so necessarily involves government taking a side, and yet was also so insoluble through the means of our Constitution.  Armed enforcement of union and central government, over secession and states’ prerogatives, was needed to solve the problem of slavery, on a morally acceptable timeline.  But no other problem is like slavery, and we need to stop seeing all our political issues in a framework that demands central-government enforcement of a single solution.

South Carolina cutting the tether with the Confederate battle flag is a good step in the right direction.  The evil of slavery and the near-cataclysm of the Civil War have dictated enough to us.  It’s time to declare and establish a basis for a better future, one less enchained to tendentious interpretations of the past.

3.  It was Democrats who enshrined the Confederate battle flag as a major regional symbol in the public spaces of the Southern states.

Republicans as a party, and conservatives as political thinkers, have never had any good reason to insist on government endorsement of the battle flag.  Constitutional conservatives will naturally defend the right of the people to display it if they want.  But that’s a separate issue – and conservatives are well equipped (unlike the left) to understand the distinction between individual rights and public policy.

The sampling of campaign images below is a reminder that Democrats have made plenty of political use of the Confederate battle flag, even in recent years.  This is not to say that Republicans have never used it, although the only campaign use I could find in a quick search was one button for Nixon in 1968.  But it is to say that it ill becomes Democrats to rail against the battle flag as if it’s a symbol of the conservative right.

It’s time to move on from this debate.  Retiring the flag from the grounds of the South Carolina state capitol won’t fix what ails us, or prove anything against anybody.  But it’s a positive step in a direction we need to move in. 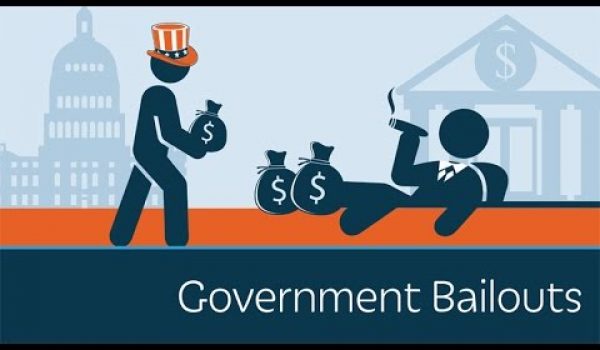