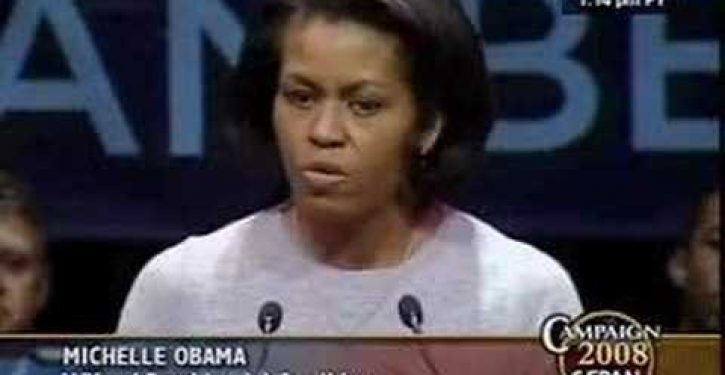 How comforting to know that Barack Obama is not the only member of his family willing to diss the U.S. while on foreign soil. His wife, Michelle LaVaughn Robinson Obama — a woman who declared at the age of 44 that for the first time in her life she was proud of her country — was in London yesterday, where she met with Prince Harry and, for some reason, spoke at a girls school with a large Muslim enrollment. It was during her comments, which the Mirror describe as “emotional,” that she compared her struggles as a young black woman in America to the experience of inner-city Muslim girls. “When I look out at all these young women [in hijabs],” she is quoted as saying, “I see myself. In so many ways your story is my story.”

So is that to suggest that these girls can all look forward to an Ivy League education via the magic of affirmative action? That’s how she got into Princeton, according to Verna Williams, a woman with whom she was friends during his first year of law school, who told Newsweek in 2008, “She recognized that she had been privileged by affirmative action and she was very comfortable with that.”

I sometimes get the sense that Michelle Obama, like Edwin Arlington Robinson’s “Miniver Cheevy,” wishes she had lived at an earlier time so she’d have something genuine to complain about. As reality dictated, she was born a year after Lyndon Johnson signed the 1964 Civil Rights Act. Whether she faced discrimination growing up or not, it is nevertheless interesting that the passage of that law was not an achievement for which she might have experienced pride in her country prior to 2008.

It is also worth noting that in her speech, she said:

[W]hat our parents told us really is true. That if we get our education we can do anything. We can lift up our sights to anything we can imagine. We truly can be builders of a new day.

Contrast that with her husband’s words just yesterday, during a speech he gave to college-bound teens here in the U.S.:

It was a rehashing of his foolish “You didn’t build that” remark, and it rings as false now as it did then. But if he and the missus are going to dispense advice to young people, maybe they should compare notes beforehand.

Why does Obama want to lift an arms ban on a tyrant who won’t even meet with him?
Next Post
Obama prepares more ‘executive actions’ on global warming