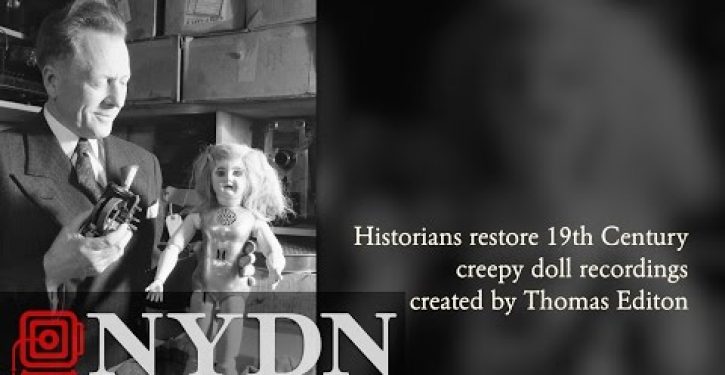 This is a few weeks old, but still well worth a few minutes.  Sound engineers have recovered and digitized recordings of “Edison talking dolls” from around 1890 (the dolls were offered for sale commercially for about a month in that year), and NPR did a story on them in May.  The NPR writer calls them “supercreepy”; I think they’re fascinating.

Each doll had a miniature phonograph embedded, which operated with a crank sticking out of the doll’s back.  The dolls didn’t sell well.  The audio quality, even in the original, was, rather naturally, off-putting.  Says NPR’s Neda Ulaby:

Jerry Fabris, who curates sound recordings at the Thomas Edison National Historical Park, says part of what makes the recordings so unsettling is that they were most likely read by a female factory worker imitating a little girl.

She probably could not have imagined that her voice would be heard again, through the magic pioneered by Mr. Edison, 125 years later.

Oddly enough, I wrote about a similar recovery of old audio material a few years ago.  In that case, the briefly-used device called a “pallatophone” had to be literally recreated by modern engineers, because there was no original specimen in existence.  The recording made from the recreated pallatophone was from the much more recent year 1929, and involved a radio address by President Herbert Hoover and Thomas Edison.

New York Daily News has some of the recordings, which are mostly nursery rhymes, collected in the video.  Some were recorded as early as 1888.  You can listen to the complete set, including unrestored as well as restored versions, here.