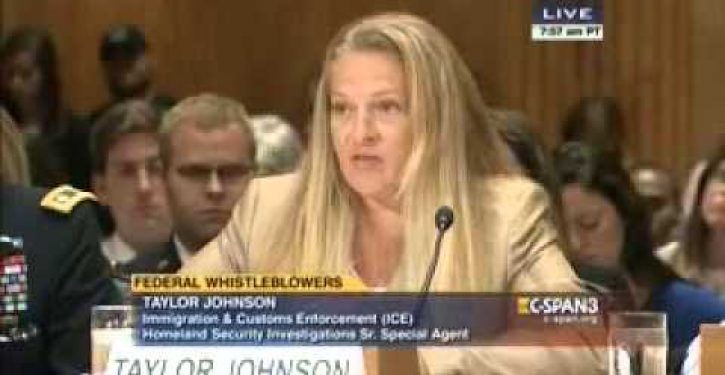 While there’s no connection alleged between this DHS whistleblower’s case and the Clinton corruption machine, it should be no surprise that the topic of concern for whistleblower Taylor Johnson – the EB-5 visa program – is one in which there’s a Clinton angle.

The whole situation reeks of the corruption that inevitably ensues when government gets too big.  It isn’t possible for government to have as much power as it has in America today, without corruption becoming entrenched, and starting to have very particular effects for individuals, along with the general effects for taxpayers and the people’s relationship with government.

One individual who felt such very particular effects is Taylor Johnson, a senior special agent in the Investigations division of Immigration and Customs Enforcement (ICE).  Her troubles began when she investigated the EB-5 visa program, a special immigration program that effectively allows the purchase of a green card for a $500,000 investment in commercial activities in the U.S.  (The awarding of the actual green card occurs after “verification” that the enterprise has created 10 new jobs in an at-risk employment market.  A less well-known provision of the 1990 law that created EB-5 visas allows an investor to buy a green card with $1 million, and skip the “at risk” element in the job-creation calculus.)

Johnson testified before the Senate Homeland Security Committee on Thursday, 11 June, about her treatment by DHS once she began to voice concerns about how the visa program was being administered.  (Emphasis added.)

Johnson told lawmakers she ran into resistance after investigating the so-called EB-5 program, which offers visas to investors. She said she looked into the program over concerns about security risks, questioning whether visas were being approved with little scrutiny.

But Johnson said her managers began to hear complaints about her queries. Soon, she was removed from the investigation, and the case was closed.

From there, it got worse.

Johnson told the Senate Homeland Security Committee her “weapon and credentials” were taken, her government vehicle was confiscated, and her access to the building where she worked and government databases was revoked.

Further, she said, “I was told I couldn’t even carry or own a personal weapon, which is a constitutional rights violation.” …

Johnson also asserted that when a social worker tried to verify her employment, the worker was told Johnson had been terminated over a “criminal offense.” [In other words, DHS seems to have lied to the social worker. – J.E.]

Choking up, Johnson testified, “I almost lost my 1-year-old-child.”

She wasn’t terminated, though. Instead, Johnson said she was told to report to another building that houses inmates and processes parolees. She said she was “held a hostage by my own agency.”

If this sounds like the kind of comprehensive intimidation the Clintons have become famous for, keep in mind that there is no reason to suspect they had any relation to this case.

This is actually an important cognitive point:  this type of corrupt mistreatment of critics and whistleblowers happens because of opportunity (created by giving government too much power) and human nature.  No Clintons have to be involved.  In fact, although substantiated allegations of this specific kind have peaked under the last two Democratic administrations – Obama’s and Bill Clinton’s – and long dogged Democrats, the pattern of silencing (or at least marginalizing) critics in the face of corruption is one that at least some Congressional Republicans have been observed following as well.  (See Peter Schweizer’s recent books Throw them All Out and Extortion for more on that.)

But what is that Clinton angle I mentioned in the opening sentence?  It relates to an EB-5 visa case readers may have heard of, if they’ve been able to keep straight the details of the multifarious Clinton influence-and-cash scandal of the last several weeks.  (Or if they were following LU contributor Kenric Ward back in 2013.)

A Wall Street Journal report in March 2015 outlined insider corruption concerns unearthed by an IG investigation of the EB-5 visa program, including the following:

In three cases involving the EB-5 visa program, the report says Homeland Security Deputy Secretary Alejandro Mayorkas intervened and altered decisions when he was director of the U.S. Citizenship and Immigration Services from 2009 to 2013.

One of those cases was that of Democrat Terry McAuliffe, now governor of Virginia, and the electric car venture GreenTech Automotive.  Clinton brother Anthony Rodham (yes, the one involved with the gold mining in Haiti) was chief executive of a company involved in fundraising (the heart of the EB-5 program) for the venture.

One of the cases cited involved Virginia Gov. Terry McAuliffe, a Democrat, who in 2010 was chairman of a venture to build electric cars with funding from EB-5 investors. Mr. Mayorkas’s intervention in that case, which influenced an agency decision on the matter, was unprecedented, according to the report.

Staff of Citizenship and Immigration Services perceived the intervention as politically motivated because of the political prominence of the individuals involved, the report said.

As Kenric Ward’s April 2013 report at Virginia Watchdog indicates, the SEC has smelled a bad odor in the EB-5 program for some time.  Shortly before Kenric’s article appeared, the SEC froze the assets of a Chicago-based company run by a Mr. Anshoo Sethi, which had been exploiting the program to raise millions under fraudulent premises.

Taylor Johnson was far from the only person to question what was going on with the visa program.  But in her case, she was concerned in particular about the decisions being made by DHS officials – and was therefore attacked on the classic fronts favored by Democratic administrations: her constitutional gun rights, her reputation with the community, her children.  If her claims are correct, she was even effectively detained by her government employer without any due process of law.

This is how institutional corruption works, and the reason we’re seeing so much of it today is that government has far too many powers to reward people, and to punish them.

We don’t even need the EB-5 visa program.  Get rid of it.  We certainly don’t need the power it gives politicians and appointed officials to distribute largesse.  Too much of government in the United States has become a giant, gaping moral hazard big enough to drive a whole carrier strike group through, and not even the most unsleeping eye could protect us from all of it.

It’s time for the biggest rollback of government ever seen in the history of the human race.  If the histories of the future focus on one thing about the 21st century, it should be that.  No, no other country could do it.  But America has always beaten the odds.