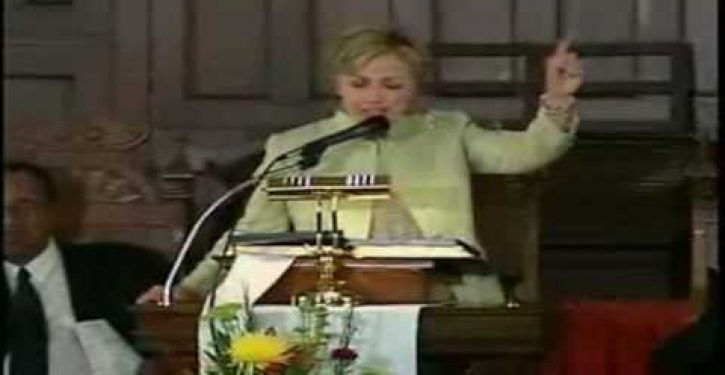 In a speech given at Texas Southern University, a historically black college, Hillary Clinton seized the opportunity to pander to the black community. She accused Republicans of “disenfranchising” poor and minority voters and called for automatic voter registration.

Clinton spoke for 31 minutes with the aid of a teleprompter, alleging that ‘hundreds of thousands of registered voters in Texas’ are being disenfranchised by a conspiracy of conservatives who want to freeze out Democratic-leaning voters. And elsewhere, she said, in the Carolinas, election officials have changed the location and open hours of polling places in order to flummox poor and minority voters.

Clinton also complained that state and local officials in southern states have crusaded against early voting plans, same-day voter registration, and pre-registration systems that target 16- and 17-year-olds in high schools.

Clinton is struggling with her approval ratings across the country — which recently dropped to 50% — and it might be starting to show on the campaign trail. According to reports, Clinton couldn’t fill the room.

Clinton was received with wild applause at the historically black college, but organizers arranged the 8,100-seat basketball arena so that three-quarters of the seats were roped off and empty. They added rows of chairs on the floor, but 15-foot-tall blue curtains draped all around blocked the view of entire sections of empty seats, leaving the impression that Clinton couldn’t fill the room.

At least, Hillary spared her audience from having to listen to her embarrassing attempts to effect a “black accent”: