An Alabama bill designed to outmaneuver a possible Supreme Court ruling in favor of gay marriage by scrapping marriage licenses died quickly in the state House this week after sailing through the Senate.

The bill would do away with marriage licenses altogether, and instead require those “legally authorized to be married” to simply sign a legal contract witnessed by a clergy member, lawyer, or notary public.

“My goal is to remove the state out of the lives of people,” the bill’s sponsor, Republican Sen. Greg Albritton, told the Decatur Daily. “No. 2 is to prevent the state from getting involved in long-term lawsuits that do no good.”

In January a federal judge overturned Alabama’s legal and constitutional bans on same-sex marriage, but Alabama Supreme Court Chief Justice Roy Moore almost immediately told probate judges they don’t have to adhere to the ruling, because the only federal court Alabama must adhere to is the U.S. Supreme Court.

In March the Alabama high court ordered probate judges to stop issuing same-sex marriage licenses, but in May the federal court again ordered the judges to issue the same-sex licenses. That ruling is on hold, however, until the Supreme Court ruling on same-sex marriage expected this month.

Albritton’s bill would avoid the issue altogether by scrapping marriage licenses for everyone in the state. If the Supreme Court rules that states must issue same-sex marriage licenses, Alabama could avert the ruling by saying it doesn’t issue any licenses.

The bill cleared the Alabama Senate easily, but died this week in the House Judiciary Committee, despite a Republican supermajority in both the House and Senate.

“It didn’t make sense to me to make such a sweeping change about how we do marriage, just because of concern about some probate judges in a bit of a spot,” Republican Rep. Mike Ball, who voted against the bill in committee, told The Daily Caller News Foundation. “It had just gotten down from the Senate to the House, and there were way too many questions to act on something that significantly so quickly.”

Regarding same-sex marriage, he said it’s important for the state to recognize civil unions, although the state can’t truly regulate the religious institution of marriage, telling TheDCNF:

That spiritual union that people seem to believe in, man really doesn’t have any jurisdiction over that anyway, and that’s my religious belief,. But as a legislator, we’re talking about what’s the role of government. And traditionally, the role of government has been to recognize marriage, because the institution of marriage is something that’s healthy for society.

We need to see what the Supreme Court says. Then we’ll know what the recognized law of the land is and then we’ll go from there.

Ball and others were concerned about unintended consequences the bill might have, such as confusion about who can sign the contract and what implications that could have on marriage laws, such as those regarding age and incest.

“We had some people that really started thinking about just how ridiculous it really was,” Democratic Rep. Thad McClammy, who also voted against the bill in committee, told TheDCNF. “Because when you start unraveling questions of incest and age and all that, that’s not anything to play with.”

He attributed the bill’s easy passage in the Senate to some senator’s tendency to get “caught up in emotional highs,” and said it was “just another act of defiance.”

“Everybody, you know, wants to be more conservative or more religious and all this,” he told TheDCNF, before citing a portion of the Gospel of Matthew in which Jesus tells religious leaders to “give back to Caesar what is Caesar’s, and to God what is God’s.”

“We are not to judge people along the lines of morality,” he told TheDCNF. “And that’s not even what we’re expected to do. So a lot of times people wear that mask [of morality], but on this particular day [when the committee rejected the bill], that common sense just settled in.” 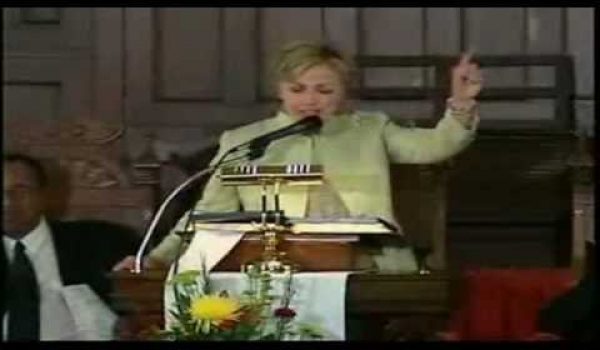 Hillary’s Texas teleprompter speech panders to black Americans (Video)
Next Post
Picture of the Day: Racism in the mirror