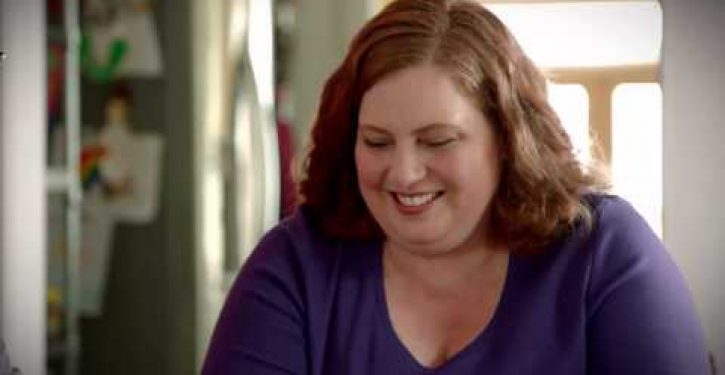 Knowing that his signature legislative “achievement” and his entire legacy hangs in the balance, Barack Obama expressed confidence yesterday that the Supreme Court will make the right decision when it rules this month on King v. Burwell. That ruling will determine whether Americans can receive Affordable Care Act tax subsidies in states that lack their own health care exchanges.

It’s hard to know if Obama is just whistling past the graveyard or is just assuming that Chief Justice John Roberts will once again save his bacon. Either way, the law remains enormously unpopular, with the segment of the public that approves of the law lagging behind those who don’t by a margin of 8 percentage points (41.5% for vs. 49.3% opposed).

In the meantime, one left-leaning advocacy group, the Community Catalyst Action Fund, is hedging its bets with a TV spot designed to convince Americans the law is good for them, whether they know it or not. The ad focuses on one Julie Adams of Nashville, Tenn., who testifies:

For 20 years, I was afraid — afraid of getting sick and having no health insurance. But when I got cancer, I finally had a health plan I could afford…. I’ll always remember how affordable health care saved my life.

You can watch the ad below:

It’s very effective so long as you take it at face value and don’t think to hard about it. If you do, you may end up with the same healthy cynicism of National Review’s Joel Gehrke, who exposes the ad for a sham. Noting that Adams published a Facebook post thanking Obama for providing her with insurance that enabled her to visit her doctor in time to save her life, Gehrke writes:

That message was published in March of 2013; the Affordable Care Act didn’t provide benefits until 2014.

Timing, as they say in show business, is everything. Gehrke goes on to quote Phil Kerpen of American Commitment, a conservative nonprofit, as saying:

The liberal political activist in the ad claiming she was uninsured until Obamacare saved her life actually bought a private plan a year before Obamacare started. And the same media ‘fact checkers’ who viciously attacked cancer patients who spoke out against Obamacare didn’t even bother to question it.

A spokesman for the group that produced the ad acknowledged that Adams had purchased private coverage. “The plan Julie purchased was too expensive for her to keep long-term (more than double what she pays now), and she really bought it as a patch knowing she would try to apply for affordable coverage through the ACA,” says Kathy Melley of Community Catalyst Action Fund.  “In January of 2014, Julie’s health coverage through the ACA kicked in and about six months later that year she was diagnosed with cancer.

Want to know when you’ll die? There’s an app for that
Next Post
Frackin’ A: New EPA study says fracking does not adversely affect drinking water