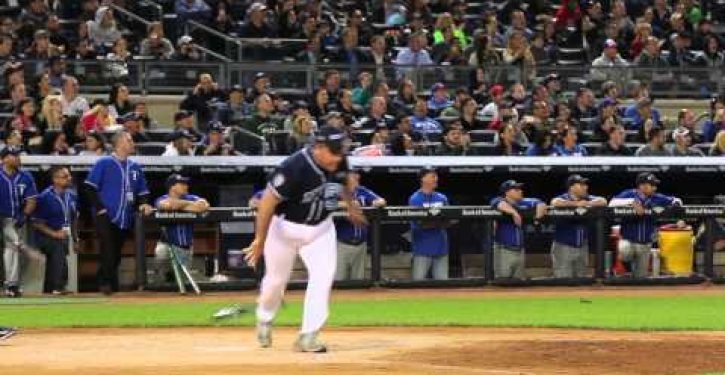 It is no secret that New Jersey governor and GOP presidential hopeful Chris Christie underwent underwent gastric band surgery in early 2013. A year and a half later, New York’s Daily News ran a slightly promotional piece noting that Christie, who had reportedly dropped 85 pounds, had hinted “to donors that he’s fit to take on the White House.”

If athletic form is one of the measures of being fit for the Oval Office, then Christie is right up there with Barack Obama, who has never tired of showing off his “pitching” motion. But one thing Christie has over Obama is his girth, which even after lap-band surgery makes him less than the picture of grace in a baseball outfit:

The occasion for Christie suiting up was a charity fundraiser for the NYPD, which is all to the good. The event was held last night at Yankee Stadium.

In addition to the stills, NJ.com captured some of the action on video. Here is footage of Christie swinging for the fences:

For the record, if Christie were to win the White House, it remains to be seen whether he would be the fattest president. That distinction at present belongs to William Howard Taft, the 27th president, who “was known as Big Lub to his childhood friends, because of his weight. In college, his friends knew him as ‘Old Bill.’ Although Taft received comments and teasing about his size, he used his weight to his advantage by becoming intramural heavyweight wrestling champion at Yale University”:

Taft … was known to have an enormous appetite that included high calorie meals. His weight problem led to many embarrassing incidents including loud belches and chronic flatulence. In addition, there is evidence suggesting that during Taft’s presidency he had severe obstructive sleep apnea because of his morbid obesity.

On one embarrassing occasion at the White House, Taft became stuck in the bathtub. He called for his staff to dislodge him and directed them to use butter to complete the task.

Is the Justice Department watching your social media account?
Next Post
Cartoon of the Day: Alternate realities