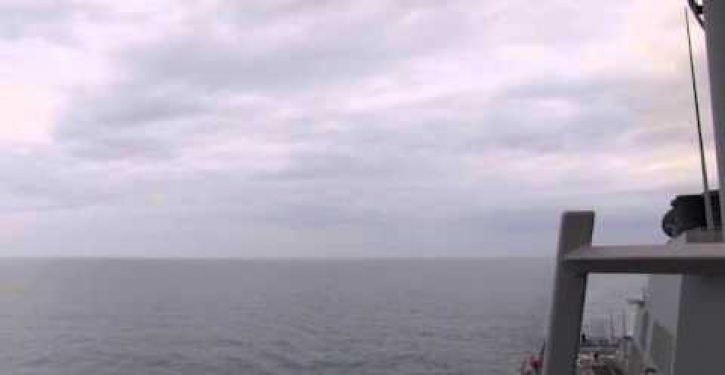 The first thing to know about Russian jets flying extremely close to U.S. Aegis destroyers in the Black Sea is that the close approaches reported to date have been to our ballistic missile defense (BMD) ships.

The U.S. began moving these ships to a new, forward home port in Rota, Spain in early 2014.  Russia objected strenuously, and has continued to.  We will be keeping four of them in Rota, to maintain BMD security patrols in the Eastern Mediterranean and Black Sea.  The missile threat they would counter, as of today, is that of Iran.  The ships are part of the BMD plan for Europe approved by the Obama administration, after its decision in 2009 to scrap the earlier plan for a ground-based interceptor site in Poland, and an anti-missile radar in Czech Republic.

That said, the Obama plan is not a one-for-one replacement for the Bush plan.  It does a different thing: it defends only Europe, and not the United States, and it will not have a capability against ICBMs.  Obama’s plan is and will be oriented toward intercepting intermediate-range ballistic missiles (IRBMs), with the potential threat being identified as Iran.

One thing that’s obvious about it, however, just from looking at a map, is that a BMD ship sitting in the Black Sea would be able to deny Russia a launch vector against Southern Europe or the Middle East through a wide swath of Western Russia.

Now, by the terms of the Intermediate Range Nuclear Forces (INF) Treaty of 1987, Russia isn’t supposed to have intermediate-range missiles to begin with, or keep them deployed in a position to threaten Europe.  But Russia has been violating the INF Treaty with intermediate-range missile tests for several years now.  The Russians have also deployed short-range surface-to-surface missiles to the Baltic enclave of Kaliningrad in order to threaten Northeastern Europe (see here as well), providing clear evidence of their intention to hold Europe at risk with their missile force.  That intention has only hardened with the conflict in Ukraine and the increase in tensions and clashing air and naval patrols in the Baltic Sea.

The types of missiles Russia would use to project power across her southwestern flank, where our BMD ships now patrol the Black Sea, are the types our BMD ships can intercept in the ascent phase.  The U.S. BMD ships would be as well positioned to intercept Russian IRBMs, launched through a certain range of vectors, as they would Iranian IRBMs launched at Europe.

So what the Obama administration has announced as a NATO defensive measure against a potential threat from Southwest Asia, Moscow sees as a maneuver to enable the U.S. to thwart Russia’s freedom of action on her southwest flank.

Such a maneuver would not necessarily be a bad thing, from the NATO point of view.  But it is bad that it’s being performed unintentionally, without any apparent acknowledgment of the operational import it carries for Russia.  Much has changed since 2009, when the Obama administration came up with this plan.  It looks different today, as an element of the U.S. posture vis-à-vis Russia, from how it appeared five and half years ago.  In 2015, Russia doesn’t actually have to be paranoid to see it as a maneuver against her operational latitude.

It’s clear to me that it is not one, because nothing in Obama’s pattern of action would support that analysis.  But the Russians would inevitably see it differently.  And leaving the appearance of such game-playing is never a good use of national power.  It just looks passive-aggressive and irresponsible.  If you’re going to rile the Russians, only do it for a reason, and with a plan.  Part of the failure here is to take that maxim into account.  (The other part is the indispensable element of having a national strategy to begin with.)

This background is the key to understanding why Russian Su-24 Fencers have been so pesky around our BMD destroyers in the Black Sea.  The most recent incidents occurred on Monday, 1 June, and Saturday, 30 May, when Fencers buzzed USS Ross (DDG-71).  In April 2014, Fencers buzzed USS Donald Cook (DDG-75).

According to the Navy, the Fencers in the incidents with Ross have been “wings clean,” meaning they carry no externally mounted weapons, such as anti-surface missiles or laser-guided bombs.  Russia is trying to maintain a provocative, stick-near-the-eye warning posture, but without getting shot.  (An Aegis ship would make short work of a Fencer pair, although encountering them in waves would present a challenge.)

In the video, it looks like the Fencer is indeed very close, probably about 500 yards from the ship, and maybe 500 feet above the water.  (Notably, the flight profile puts the Fencer out of position to use a gun on Ross.  The close pass is to send a message of annoyance, not to precisely simulate an attack run.)  Look for the aircraft just above the horizon, and just to the right of the center of the video screen, about 22 seconds in.

Obama says he’s made U.S. once again ‘the most respected country on earth’ (Video)
Next Post
SCOTUS vindicates right to make crazy-sounding threats on the internet