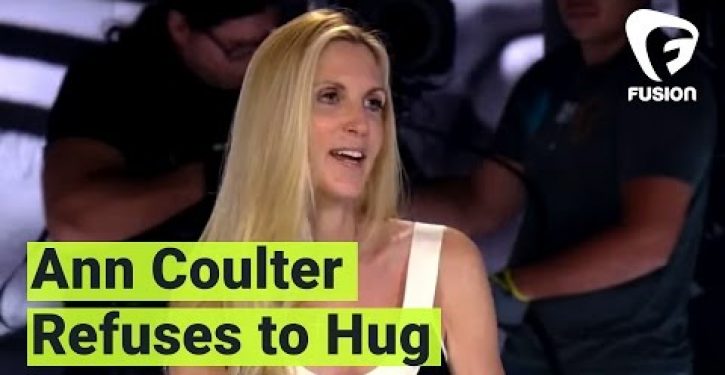 No, this isn’t about Coulter’s later comment, in an email to Breitbart, that if she were in charge of immigration policy, she would not admit overweight girls to the country.  (Although we’ll get to that.)

What you didn’t hear is the exchange that ensued when the illegal who wanted a hug finally asked her question.

If you have somehow missed illegal alien Gaby Pacheco asking for the hug, here’s the video.

The video of the “hug” negotiation has gone viral.  But the actual question Pacheco finally posed in the Q&A session has not.

Matthew Boyle at Breitbart sets it up for us:

First off, despite Pacheco being identified on screen via lower-third graphic as “GABY PACHECO, IMMIGRATION ACTIVIST,” Pacheco’s true identity and role in the amnesty activism community certainly wasn’t provided to the Fusion audience.

Pacheco, an illegal immigrant from Ecuador, is the program director of the amnesty activism group TheDream.us, founded the Florida immigrant youth network, and led a national Trail of Dreams four-month campaign walk from Miami to the nation’s capital. …

President Obama’s White House has used Pacheco as its model illegal alien to advocate for amnesty—and specifically to allow illegal aliens to serve in America’s military, something that has gotten many Republicans snookered into supporting using the military as an amnesty vehicle into serious political trouble.

Curiously, none of the media outlets—including Fusion—that highlighted the “can I give you a hug?” question actually reported the crackpot question Pacheco finally came up with during – again — the Question-and-Answer session.

Only the handful of people who watch the small-market cable network’s post-10 p.m. broadcast caught the eventual question.

So, what was the question?  Boyle gives us a transcript:

“There’s freedom of speech and there’s also hate speech,” Pacheco told Coulter. “I wholeheartedly believe in our First Amendment right. But many of the things you say on TV, on the radio, in your books, not only do they incite fear—but they also incite hate. So I wanted to ask you if you feel you’re abusing your First Amendment rights and do you think legitimately what you are saying is right?”

Coulter, of course, did not suffer this foolishness gladly.

“Well, two points,” Coulter said. “One is: you don’t understand the Constitution if you say there’s free speech and then on the other hand there’s hate speech –”

Pacheco cut her off: “No I know that under the law and the Constitution there are both—”

There was a brief verbal scuffle, but Coulter was able to make the salient point in response:

“No. There’s speech,” Coulter explained. “There’s not speech and hate speech. And judging by the last question, apparently you people can’t tell the difference in what I’ve actually said and some crazy parody site. Because — I don’t know what you think is ‘hate speech.’ I don’t engage in hate speech. I engage in speech. And yes, it’s part of the long, Anglo-Saxon tradition of thinking that with free speech, and the contest of ideas, the truth will emerge. It goes back to John Stuart Mill.”

There were a few more words, but that’s the gist of the Q&A.  Listen to the audio (video below) of Coulter on Sean Hannity’s radio program on 28 May to hear her discuss it a little further.

To emphasize Coulter’s point:  there isn’t “speech and hate speech” in U.S. law.  And as Matthew Boyle (and Coulter) observe, that’s a profound and essential aspect of the American understanding of law and liberty.  Government doesn’t slither around presuming to detect “hatred” in our speech, and punish us for it.

Government may be coming perilously close to doing so, with our misguided and philosophically corrupting “hate crime” laws, but it hasn’t done so yet.  In the canon of American law, we don’t have “hate speech” as a recognized category of punishable offense.

I would differ with Coulter on a couple of points.  One, young Gaby Pacheco isn’t the problem here: she’s not the reason why the false proposition about “hate speech” has been bred in her mind.  Neither is the culture of Ecuador, where she came from, although clearly not where she imbibed her ideas about freedom of speech.  (She was too young when she was brought to America to have learned political philosophy in Ecuador.)

What’s producing Gaby Pachecos is something we won’t get rid of by getting illegal immigration under control, however worthy that goal is.

Pacheco was brainwashed with the “hate speech” theme in American schools.  Young people of all ethnicities and backgrounds have been brainwashed with it.  They’ve been actively denied the opportunity to develop a capacity for logic and a knowledge of the American philosophy of liberty and government, and too many of them vaguely imagine that there is something called “hate speech” in U.S. law.  They’ve been turned into the “friends on the left” that Ronald Reagan spoke of in his famous joke: they know so much that isn’t so.

To say that is not to say that the underlying culture isn’t different north and south of the U.S. border.  It is, and that matters.  But Gaby Pacheco grew up here; she isn’t a product of a foreign Latino culture.  She’s a product of the American left.

But there’s hardly anything more banal than being indignant about such obvious outrage-bait, so I’m not going to dwell on it.

The ‘Riot Act’ must not become America’s new normal
Next Post
Cruz: No federal money for schools that boycott Israel