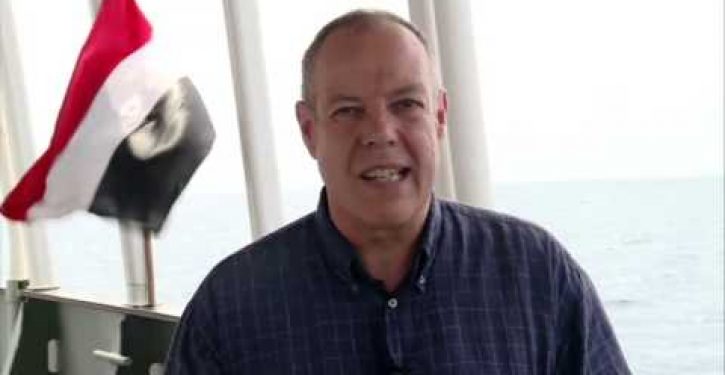 There are some important things to know about the Iranian cargo shop Iran Shahed, which left Bandar Abbas, Iran on 11 May and expects to get to the Houthi-held port of Hodeidah, on the Red Sea, on 20-21 May.  Iran claims the ships is carrying only humanitarian-aid cargo.

1.  The ship itself is on the U.S. Treasury list of vessels and shipping entities under sanction due to complicity in arms proliferation.

2.  We aren’t going to do anything about that.

3.  The Saudis have imposed a blockade on Yemen and are determined to prevent the importation of arms (i.e., from Iran to the Houthis) by air or sea.

4.  Iran is escorting Iran Shahed with naval ships, and has basically threatened to fight if the Saudis try to stop the ship.

5.  There are two Americans riding Iran Shahed, along with activists from France and Germany, and members of the Iranian media – because in radical circles, the ship’s mission is now a cause célèbre like the occasional “flotilla” attempts to break the blockade of Gaza’s coast.

Little information is being retailed in the mainstream media on this, however.

The ship Iran Shahed was built in 1999 and spent its first six years as M/V Radesingel.  In November 2005, Valfajr Shipping Company changed the name to Iran Shahed.  In September 2008, based on George W. Bush’s Executive Order 13382, issued 28 June 2005 (see the text here), Iran Shahed was placed on the U.S. sanctions list, along with all of the ships operated by the Islamic Republic of Iran Shipping Line (IRISL) and its subsidiaries (which include Valfajr Shipping).

Interestingly, Iran Shahed is one of very few sanctioned ships that have not changed names, ownership, or flag since the 2008 designation by the U.S. Treasury.  (See this Reuters special report from 2012.)

But Iran Shahed did make another supposed “humanitarian” support run during an earlier conflict.  In the middle of Operation Cast Lead in Gaza in January 2009, Iran Shahed attempted at least twice to reach the coast of Gaza, on 13 and 14 January.  The IDF prevented the ship from getting closer to the coast than 20 nautical miles.  Egypt wouldn’t allow the ship to put into the port of El Arish, just across the Rafah border crossing from Gaza, and eventually it left the area.

(Iran Shahed’s drama was wholly overshadowed a week later when Cypriot-flagged M/V Monchegorsk, bound for Syria, was inspected by the U.S. Navy in the Red Sea and found to be loaded with 55 crates of mortar shells coming from Iran.  The U.S. prevailed on Cyprus to divert the ship, and its prohibited cargo – which violated UN sanctions – was finally offloaded in February of 2009.  It sat in a warehouse for over two years, and eventually figured in a huge explosion in Cyprus in 2011.  See here and here.)

There are multiple dimensions to the arms proliferation issue attending Iran Shahed’s voyage to Yemen.  One is the embargo imposed by the Saudis, who want to prevent Iran from arming the Houthis, and who will insist on boarding the ship and inspecting the cargo.  The U.S. is not a party to the Saudi coalition, and there is nothing to indicate we will assist its enforcement.

The second is UN sanctions on arms deliveries to the Houthis, which were agreed to by the Security Council in April.  Effectively (see below), the Saudi-led coalition is the only armed force actually engaged in implementing those sanctions.

But another is the UN sanctions on Iran, which prohibit the proliferation of arms abroad.  UNSCRs 1747, 1803, and 1929 together impose an arms embargo on Iran (proliferation abroad and purchases by Iran), and call on member states to inspect Iranian ships and aircraft (as well as ships and aircraft chartered by Iran) to ensure they aren’t carrying prohibited arms.

Some nations have used this authority to actively intercept arms cargos coming from Iran, such as Israel and Turkey.  But in the Obama years, the U.S. has not taken this active role.  In April, the U.S. military was emphatic that it had been given no mission to interdict Iranian arms shipments to the Houthis. That clarification would cover both the enforcement of the embargo around Yemen, and the enforcement of UN sanctions on Iranian arms proliferation in general.  Bottom line: it would be a major change in policy, and would probably surprise the heck out of Congress, if Obama suddenly had the U.S. Navy stop and board Iran Shahed.

The fourth dimension is the one mentioned above: U.S. sanctions against the ship and the shipping line.  But those sanctions would be hard to enforce in the Iran Shahed case: we have no mechanism for putting pressure on a third party to withhold cooperation or financial participation from Iran, as a way of preventing a shipment.  This is Iran’s show, and there’s no third-party involvement.

It’s also worth noting that the Obama administration appears to be backing off of enforcing the financial sanctions against Iranian shipping anyway.  Claudia Rosett reported earlier this month that Iran’s ships are plying the world’s waters and ports with increasing openness – and U.S. officials were basically unresponsive when she queried them in April about a ship with a history of highly suspect behavior, which had recently pulled into Venezuela.

That fits an emerging pattern in which the Treasury sanctions are now being ignored.  Eli Lake pointed out last week that the recent sale of jets to Iran’s Mahan Air (yes, an ironic name for naval observers) violates the Treasury sanctions list.  That apparently didn’t stop the parties to the sale, which reportedly included Virgin Atlantic and Iraq’s Al-Naser Airlines.

The sanctions also didn’t stop Oman, in late April, from launching a new joint shipping venture with Iran, which will inevitably involve the Iranian companies and ships that are under Treasury sanctions.  Oman doesn’t seem to expect a backlash from this move.

Sanctions don’t enforce themselves.  In general, the sanctions against Iran appear already to be on the skids.  And in the specific case of Iran Shahed, there is no sanctions mechanism that will kick in somehow to stand between the ship’s cargo and the Houthis.  There’s only the Saudi navy.

The next few days will tell the tale.  The Iranians and Saudis have both vowed to see it through: the Saudis to enforce the embargo, the Iranians to refuse boarding or inspection.

According to Nader Uskowi, a highly regarded blogger on Iranian affairs, Iran says the ship’s visit to Hodeidah has been coordinated with the UN.

If this statement from Iran is accurate, it means the UN has gone in the space of a month from believing sanctions on the Houthis need to be enforced, to accepting anything Iran – an inveterate sanctions violator – says about the cargo she dispatches.  The peculiarity of our time is that that is certainly possible.

But say for the sake of alertness that it’s not.  What exactly is going on out there?  Iran Shahed entered the Gulf of Aden over the weekend, and on Sunday, Fars News reported that a frigate from the antipiracy coalition was following the ship.  Time gives a slightly different account, based on a phone call with the Fars reporter onboard Iran Shahed:

Bakhtiari, who was speaking via satellite phone from the deck of the ship, said their vessel was approached by a ship on Sunday morning, which requested information by radio. “It kept a 6-mile distance and asked our port of origin and destination and followed us for some time. But when our ship’s captain asked it to identify itself it just said it is part of the coalition and didn’t say whether it was the anti-piracy coalition or the Saudi-led coalition.”

This seems, well, incompetent on the part of the ship’s captain, and certainly on the part of his armed escort, the Iranian frigate Alborz.  Neither ship’s crew should have had any difficulty identifying the approaching ship or knowing which coalition it was part of.  (Alborz has been deployed as part of Iran’s 34th Flotilla, for antipiracy operations, since mid-April, and assuredly knows every warship that’s operating in the Gulf of Aden.)

But perhaps the reporters and activists onboard Iran Shahed are being kept in the dark.  None of them, as far as I can tell, has been enterprising enough to take pictures of the ships they encounter – such as the coalition frigate on Sunday morning – and post them to social media.  (If they did, hundreds of naval intelligence professionals around the world could help the Iran Shahed’s master identify which coalition warships are hailing him on bridge-to-bridge.)  The activists do, however, assure us that they’ve been allowed to view the 2,500 kilos of humanitarian cargo, and are satisfied that there are no arms lurking in the crates.

The two Americans onboard are Tighe Barry of CODEPINK and activist Caleb Maupin (Robert Naiman, originally scheduled to participate, had to drop out at the last minute).  A German reporter and activist, Christoph Hoerstel, has posted some updates, and gave an audio interview on May 11, the ship’s departure date.  (For German speakers, his video update from Sunday, 17 May, is here.)  Explore their musings at your leisure.

Meanwhile, Iranian media have reported in the last 48 hours that “Saudi warplanes” conducted air strikes against “UNICEF ships” trying to make a delivery to northern Yemen on some recent but unnamed date.  However, the image used by Press TV, attributed to UNICEF Yemen, was posted on Twitter by UNICEF Yemen without any reference to interference from the Saudis.  The UNICEF tweet shows several ships, all of which, according to the tweet, successfully delivered humanitarian cargo to locations in southern Yemen.  So the whole thing looks like Iran trying to get something started.

That said, Press TV cites Yemeni television as its source.  And it’s not impossible that the Saudis have threatened unapproved ships trying to make for the coast.  Off of northern Yemen, it would probably be Saudi aircraft, as Saudi warships are concentrated around southern Yemen, where the battle with the Houthis rages.

We can expect, in general, that the mainstream media will downplay whatever happens, if it should raise expectations in the public mind that the U.S. will do anything about this situation.  U.S. officials assure us that we are tracking Iran Shahed, but that is meaningless.  We won’t be using national power to avert the development of an armed standoff, nor will we be there to settle one.

Maybe we’ll get lucky, and Iran Shahed will divert somewhere (Eritrea, perhaps) rather than face down the Saudi navy.  That won’t end the crisis, however.  Iran will be all the more determined to assert authority, with gunfire, over the Strait of Hormuz.  It won’t be very long before this complete collapse of the U.S. enforcement posture on the high seas will affect American trade interests, along with everyone else’s.