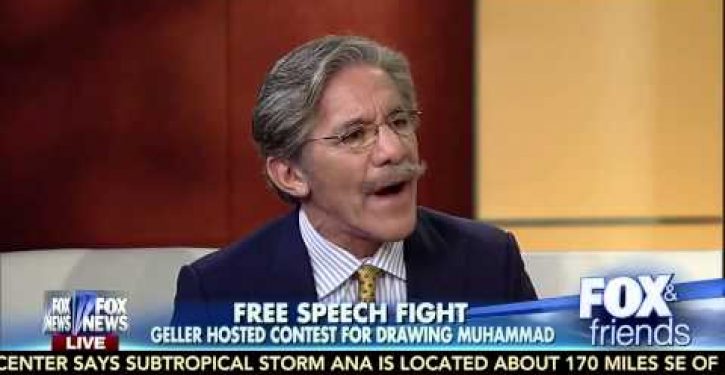 Onetime attorney, turned-investigative reporter-turned insufferable bore Geraldo Rivera, fresh off nearly getting his clock cleaned by a Baltimore street thug, was on “Fox & Friends” this morning to share his views of blogger Pamela Geller, whose life was threatened earlier this week by spokesman claiming to represent the Islamic State for daring to insult the prophet Muhammad. But Rivera wasn’t there to weigh in on the terrorist scourge or their efforts to silence free speech. Rather the target of his wrath was Geller herself.

In the video, which follows, he compares her to the Aryan Nation, skinheads, and Ku Klux Klan, saying, “I see them on television now and I feel like taking a shower.” I can understand where Rivera’s coming from. I often get the same impulse after watching his antics on TV.

He went on to say:

If Pamela Geller, if you put ‘Jew’ in there or ‘Irish’ in there or ‘black’ in there, any other groups, she would not be given the tolerance to spew her hateful rhetoric….

Look around this diverse, wonderful Fox News where we work. Pick any group. Would any other group tolerate this taunting and inciting? We wouldn’t speak to that person. We would shun her if she picked on any other group but Muslim.

After acknowledging that the two terrorist gunmen “got exactly what they deserved,” he continued his tirade:

It does not in any way make me feel any better about Pamela Geller spewing her hatred and making us all look like the intolerant jerks they are saying we are in the Middle East and elsewhere. She does not do this country any good; she doesn’t do Jewish people any good. She doesn’t do anybody any good except self-aggrandizing, attention-seeking spewing of hatred that I cannot tolerate.

Watch the full segment below, via Fox, but be warned: You’ll need a shower when you’re done.