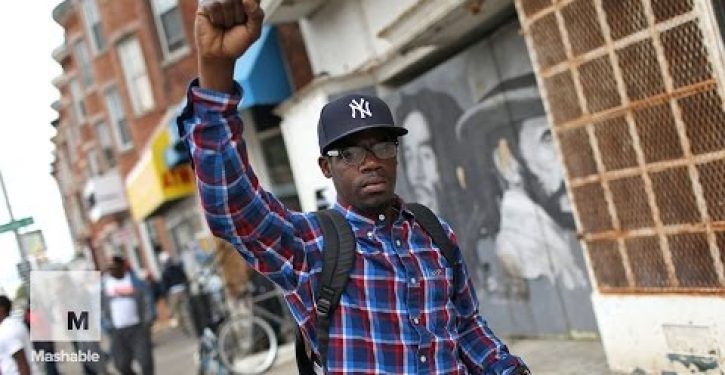 Yesterday, within minutes of state’s attorney Marilyn J. Mosby’s announcement to the press that the six officers involved in the arrest and ultimate death of Freddie Gray would face criminal charges, cheers went up all over Baltimore. Car horns blared and fists were raised in a black power salute, all part of a display that can best be described as celebratory.

“Yaaay, justice!” declares the first woman in the video montage that follows. “They need convictions,” another jubilant Charm City resident tells the camera, while a third man, seated on a stoop, says, “I’m glad it happened, because if it didn’t happen, it would be ugly in my city right now.”

Rashawn Ray, a sociologist at the University of Maryland, attempted to put a more scholarly spin on the decision to bring charges, telling station WRAL:

This definitely seems like the first time in recent history that the state has done what the community feels is the right thing. These charges become a representation of culpability, responsibility, that the state can’t just treat citizens like they are not human beings.

If a consensus can be distilled from the sum total of these reactions, it is that justice has been served … or at least the appetizer course. What comes next is the main event and it is non-negotiable. “We are satisfied with today’s charges,” Gray’s stepfather, Richard Shipley, said at a press avail of his own. “These charges are an important step in getting justice for Freddie.” Absent the conviction of all six officers, the city of Baltimore  — and the nation — is back to square one.