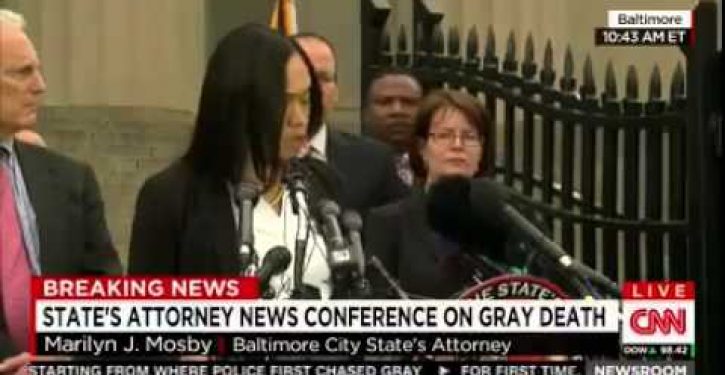 Despite word yesterday that the official verdict on the death of Freddie Gray would not be released until next week, prosecutors in Baltimore announced today that they had filed homicide, manslaughter, and misconduct charges against police officers in Gray’s death. Gray died as a result of a spinal cord injury that he sustained while in police custody.

In a report on the unexpected turn of events, the New York Times writes that state’s attorney Marilyn J. Mosby held a press conference in which she said the officers arrested Gray without grounds and violated police procedure by placing him in handcuffs and leg restraints inside a police van without ensuring that he was wearing a seat belt.

Mosby said further that the officers failed to seek prompt medical attention for Gray after he was injured. “We have probable cause to file criminal charges,” Mosby said.

Ms. Mosby also said that the knife the police say Mr. Gray was carrying had not been a legitimate basis for his arrest. “The knife was not a switchblade, and it is lawful,” she said. She said the officers had “failed to establish probable cause for an arrest.”

As she announced the charges [at a public venue] … there was cheering from people in the crowd. Dozens of police officers dressed in riot gear stood nearby after days of unrest in the city.

Ms. Mosby said six officers were being charged, one with second-degree murder. She said warrants had been issued for the their arrests; she said she did not know if anyone was in custody.

A video of highlights from Mosby’s presser follows.

If convicted, some of the officers implicated in the death could face up to ten years in prison.

Meanwhile, Donta Allen, a second prisoner in the back of the same van as Freddie Gray but separated by a partition, has altered his earlier claim of hearing what sounded like Gray banging his head into the van walls. Weasel Zippers reports on an interview Allen gave Baltimore station WBAL in which he was “unclear” on the details and perhaps is seeking “to impeach his own credibility” so as not to be seen as a snitch.

The whole affair has something of the air of a rush to judgment, designed to mollify protesters and ease tensions. Protest marches in several cities, including New York, will proceed as planned today.