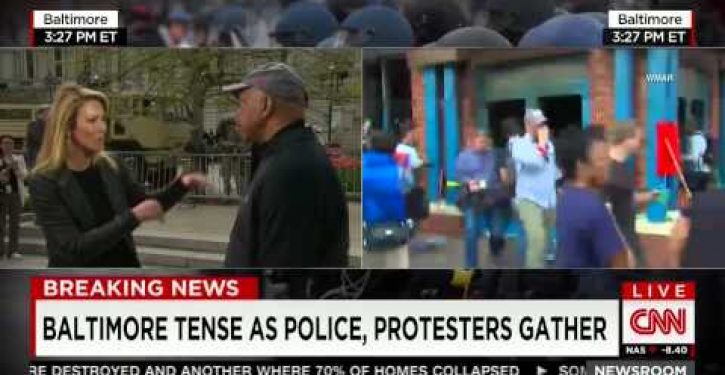 Perhaps Brooke Baldwin’s “logic” isn’t what you would expect, as she tees up the absurd proposition that military veterans are the underlying problem creating the riots in Baltimore.

On the other hand, it may be exactly what you expect.

In the clip below (h/t: Breitbart), Baldwin does not finger vets for being violence-prone or having poor impulse control.  Indeed, she doesn’t associate vets with the rioters at all.

Instead, she advances a proposition so weighed down with progressive-left premises that it might as well be a ship sinking from the weight of a barnacle infestation.  According to Baldwin, the way vets play into the Baltimore riots as bad guys is that they return from their military service and become cops.

So, first, you have to buy into the premise that the cops are the problem in Baltimore.  Baldwin is talking to Rep. Elijah Cummings in this clip, so of course she’s preaching to the choir.  They’re apparently both in vigorous agreement that the police are the problem.  That’s certainly the assumption made by the race-baiting left, up to and including the president, regardless of the particulars of any given incident.

Baldwin’s little refinement in this case is the proposition that vets become cops and then don’t know the community, but are loaded for bear.

I love our nation’s veterans, but some of them are coming back from war, they don’t know the communities, and they are ready to do battle.

This sounds like projection to me, frankly.  There’s no one so ready to do battle — more than that, to shoot first and ask questions later — as a progressive leftist who thinks she’s got a victim fable unfolding before her, and/or a suspect from the Left-wing Villains Hall of Fame in her sights.  Cops and vets — armed, mostly men, representing force and authority — are in the top tier in that hall of fame.

Baldwin and Cummings agree that the police are in desperate need of more training.  And in a limited sense, it may be that training was an issue in how the Baltimore police handled Freddie Gray.  We still don’t know exactly what happened when he was in police custody, but it’s reasonable to suspect that his death was connected to his being mishandled.  The people of Baltimore have the right to expect an urgent and thorough investigation, followed by proper discipline or even criminal charges, if appropriate.

But Baldwin wasn’t talking about that.  Her fatal error and Cummings’ is in suggesting that training for the police would keep riots — and looting and destruction — from happening.  What keeps riots, looting, and destruction from happening is clearly something else, because the American people refrain from rioting, looting, and destroying all the time, in spite of the errors made by the police.  This is the case regardless of the races of police officers, perpetrators, and victims of police malfeasance or error.

Only sometimes have we seen out-of-control rioting, and yet police departments and prosecutors screw up more than sometimes, if by no means incessantly.  The common problems in Ferguson and Baltimore so far have been weak and inexplicably delayed leadership action from local officials, and young males from a government-created underclass, accustomed to living without paternal authority, but with society organized to make excuses for them.

What Obama claims to want has actually been the ruling reality for these young males for the last 50 years.  There’s nothing else that needs to be done.  Obama already has everything he wants.  No one has to spend another dime; no one of another race or economic stratum has to make even one more concession.  Everything the Democratic left has demanded since 1960, it has gotten. We live in the world the left made.  This is the result.