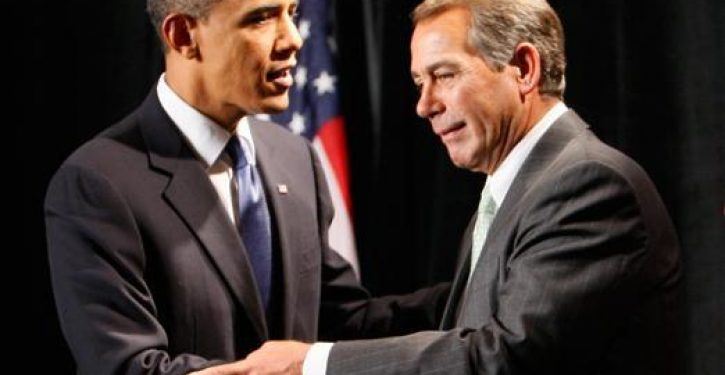 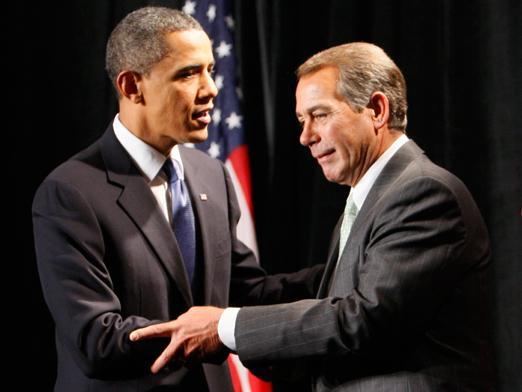 With so much riding on the fiscal cliff talks, I figured there would be tremendous interest in knowing just what House Speaker John Boehner and President Barack Obama said to each other on this topic last week. You’ll be delighted to know that I had planted a secret microphone (OK, actually 3 or 4, but who’s counting? I’ve got this great technician, goes by the initials J.S.) and this is what I learned:

Boehner: Mr. President, I’m doing the best I can, truly I am! The Tea Partiers won’t let me go any farther out on this branch – in fact, I worry that they’re hacking it down as we speak.

Obama: Look, elections have consequences, and I just got re-elected. So don’t waste my time complaining about a bunch of ignorant tea-baggers who are racists anyway. I’ve never understood why you guys were so hung up on a tax hike on upper income folks – it’s no big deal! You know perfectly well that they’ll find ways to get around any new tax rate, just like they did with the old one; after all, what’s the point of being rich if you can’t hire a good accountant?

Boehner: Yeah, but even if we agreed to raise rates on people making more than $250,000, and even if they actually paid at the new marginal rate, we both know that would only cover a very small fraction of your annual deficit. So here’s what I want to know: how do you plan to cover the rest of it?

Obama: What do you mean, how do I plan to cover it? What’s important is not reducing the deficit, but redistributing the wealth. I’ve got stuff to do, people to help, changes to make, vacations to take. So why are you boring me with this deficit talk?

Boehner: The deficit is going to come due in some fashion, at some time, probably in the not-too-distant future. What will you do then?

Obama: Why does that matter? I’ll blame it on you and you know, as well as I do, that public opinion will agree with me.

Boehner: But don’t you care at all that we now have over $16 trillion in federal government debt?

Obama: We both know there’s an easy way to fix that problem, and it doesn’t involve raising taxes on the middle class – which you know I’d never do. It’s simple: introduce a value added tax, a VAT.

Boehner: But, but, but….(gurgling noises)

Obama: A VAT would solve all our problems, believe me! After all, they use it in Europe, so it must be good! The tax is hidden inside the price of everything you pay for, but you don’t ever know exactly how much, so you just pay and forget about it.

Boehner: But a VAT is the most regressive tax around. It hits the poorest people the most, since they spend the largest percentage of their income on consumption, not savings.

Obama: No problem – the poor will all be protected by my social benefits programs. We can always introduce more programs if the existing ones get stretched a little thin. There’s absolutely no problem. Look at what I’ve done with food stamps and you get the idea.

Obama: So what? They’re the ones with the money. We both know that taxing the rich won’t solve our deficit problem, and taxing the poor is obviously out, so what other option do we have? C’mon, the middle class can take it – look at the way they live now. Cars, houses, college for the kids, vacations – a little belt-tightening would do them good!

Besides, no one will ever notice. It’s not like an income tax that you have to cough up once a year, or a sales tax that you see every time you hit the check-out counter. It runs in the background, outta sight, outta mind.

Boehner: Why don’t we just stop spending money we don’t have?

Obama: You must be kidding! Are you willing to say in public that you want to undermine the social benefits for the poor or destroy entitlements? You should be ashamed of yourself!

Obama (under his breath): I love watching this guy twist in the wind, thinking that he has to try to actually solve problems. Boy is it fun to destroy House Republicans! Maybe I can play with him some more after Christmas…