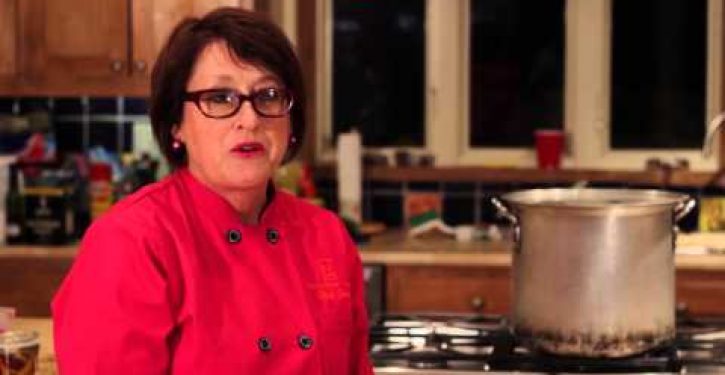 This story has all the elements of your present-day left-right tug of war over religious freedom. It involves a member of the food service industry who has cited her state’s Religious Freedom Restoration Act as justification for her actions, which embody Christian charity. In spite of her protestations, she and her business are under siege.

Yet, the protagonist in this particular food fight is likely to win the sympathy of the left. Her name is Joan Cheever, and she is founder of the 501c3 nonprofit mobile food truck the Chow Train. As she explains in a video at her website, reproduced below, her mission is to feed the homeless in her hometown of San Antonio, as she has been doing for the last ten years.

As the San Antonio Express-News explains:

Over the years, police officers have passed by and waved as she fed homeless people, but last Tuesday night four bike-patrol officers stopped in the park and gave Cheever a ticket that carries a potential fine of $2,000. Cheever has a food permit for her mobile truck, but she was cited for transporting and serving the food from a vehicle other than that truck.

Cheever is scheduled to go before Municipal Court on June 23, but she remained defiant after receiving the citation, arguing that under the 1999 Texas Religious Freedom Restoration Act, she has a right to serve food to the homeless because she considers it a free exercise of her religion.

The problem is a technicality: Cheever’s permit has expired. While she awaits a renewal, she contends that the people she feeds remain hungry. The meals she serves, moreover, are still prepared  in compliance with city health codes and transported to Maverick Park, in downtown San Antonio, in commercial catering equipment. Proper temperatures are maintained and standard food safety practices are followed.