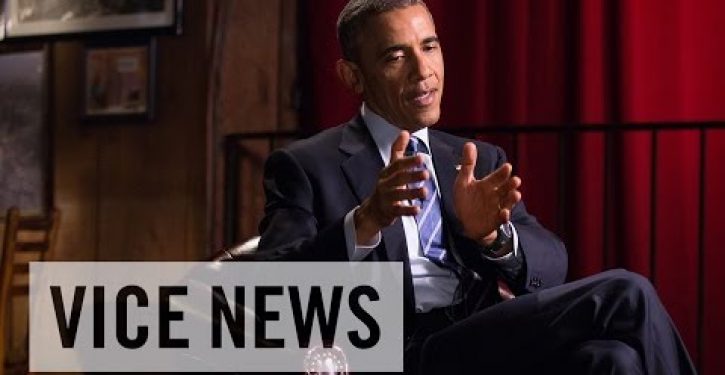 Remember when the Obama administration pooh-poohed public opinion polls, which unanimously found that the majority of Americans opposed the health care law? In July 2013, then-Press Secretary Jay Carney predicted that eventually the American public would come to love Obamacare, once they got a load of all the goodies provided by the law. Judging from the today’s Real Clear Politics average, that never happened. Currently, 42% of respondents approve of the law while 52.5% disapprove.

You’d think the administration would learn from its experiences? Not a chance. The president told VICE News in an interview that he can “guarantee you that the Republican Party will have to change its approach to climate change because voters will insist upon it.” It’s just not the case right now, he added.

“If you poll folks, they’re concerned about climate change, but they’re even more concerned about gas prices,” he told VICE, an HBO documentary series, adding that Republican lawmakers are putting up stiff resistance to his climate agenda:

In some cases … you have elected officials who are shills for the oil companies or the fossil fuel industry and there’s a lot of money involved. Typically in Congress, the committees jurisdiction, like the energy committees, are populated by folks from places that pump a lot of oil, pump a lot of gas.

If I can change how the country thinks about this as a serious and immediate threat — not some distant vague thing. We will have made enough progress that the next president and the next generations can start building on it and it can start to get some momentum.

But Obama’s arguments that regulating greenhouse gases is necessary has fallen short. A January CNN poll found that 57% of Americans did not see global warming as a threat to their lives.

And while he is right that people care more about gasoline prices, he forgets to mention that his policies will cause energy prices to “skyrocket,” as he himself once predicted. EPA regulations are expected to cause electricity and natural gas prices to rise as coal-fired power plants are closed. Obama administration regulations on hydraulic fracturing on federal lands and methane emissions from oil and gas wells could also impact energy prices.

With most Americans caring little about global warming when gas prices are low, the prospects for people caring more about the climate as gas and other energy prices rise is even less likely. And even Obama admits that pushing his climate agenda will not be easy.

Climate change is an example of the hardest problems to solve. The hardest things to do in politics and in government is to make sacrifices now for a long-term payoff…. The challenge on something like climate change is there comes a point of no return, and you do have to make sure that we get at this thing quick enough and with enough force to be able to make a difference.

Obama’s VICE News appearance comes on the heels of an interview given by Vice President Joe Biden. In that interview, oddly enough, Biden told VICE that a lot of people would be hurt by the administration’s regulations targeting coal-fired energy:

Us moving away from coal because it’s such a polluter, there’s a lot of people going to get hurt, good people who worked their whole life.

Islamic State announces plans to destroy Sphinx, pyramids in act of Islamic ‘purification’
Next Post
De Blasio tears NYPD a new one for editing Wikipedia pages; can you guess what mayor did the same thing?