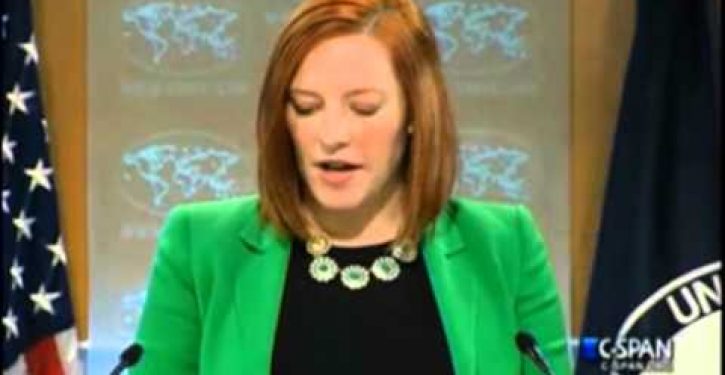 After a week’s worth of days of “looking into the matter of whether former Secretary of State Hillary Clinton signed a Form OF-109” — a separation agreement that all officials are required by law to complete upon leaving posts in the State Department — spokesmodel Jen Psaki finally had an answer for the press pool today. Namely, someone finally made the journey across the room (or down the hall or up a flight of stairs) to where Clinton’s personnel file is maintained and determined there was no OF-109 to be found.

As I explained on Saturday, the the department’s Records Management Handbook definitively states:

Departing officials must ensure that all record material that they possess is incorporated in the Department’s official files and that all file searches for which they have been tasked have been completed, such as those required to respond to FOIA, Congressional, or litigation-related document requests. Fines, imprisonment, or both may be imposed for the willful and unlawful removal or destruction of records as stated in the U.S. Criminal Code (e.g., 18 U.S.C., section 2071).

Part of the lawful process for “signing out” is affixing one’s signature to a Form OF-109, which says that the outgoing employee certifies under penalty of law that he has “surrendered to responsible officials all unclassified documents and papers relating to the official business of the government acquired by me while in the employ of the Department.”

But Jen Psaki tries to blunt [criticism] by saying other Secretaries of State didn’t sign it (so if Bobby jumped off the bridge, it’s ok if you do it too?), and we don’t know if it’s really required.

But other Secretaries of State have not admitted to destroying 31,000 documents of their own free will. Clinton has and could therefore be charged with a felony if she did sign an OF-109. If she didn’t sign one, then the American have a right to know by whose authority.