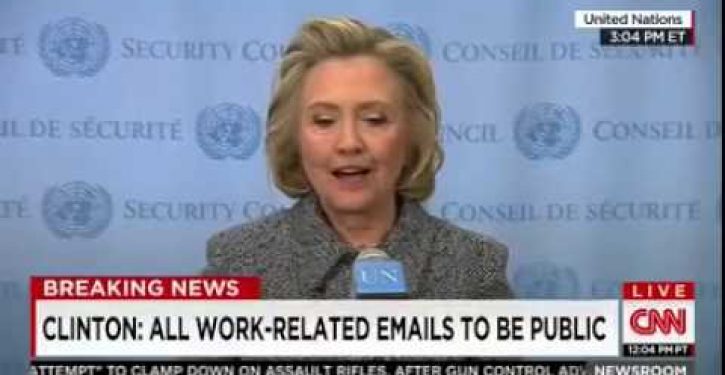 What difference at this point does it make that Hillary Clinton used a private email account, run, moreover, on a “homebrewed” server during her tenure as secretary of state? Plenty, apparently.

The former first lady and one-time presumptive Democratic candidate for the White House in 2016 has found herself at the center of a widening storm of controversy since the New York Times first reported that the personal email account last week. Longtime Democratic supporter Dianne Feinstein appeared on “Meet the Press” last Sunday, where she said that Clinton “needs to step up and come out and state exactly what the situation is … I think, at this point, from this point on, the silence is going to hurt her.”

Former Senior Advisor to President Barack Obama and confidante David Axelrod concurred, saying that Clinton had “given oxygen” to the story by not commenting on the scandal.

One might question the wisdom of burying the comments in what sounds like another campaign stop, especially in light of the low profile Clinton has been keeping since the controversy erupted. It will nevertheless be interesting to hear what her defense is.

*UPDATE* Well that went well, don’t you think? Clinton used a private nongovernmental email address while she served as secretary of state, she said today, as “a matter of convenience,” that she “thought it would be easier to carry one device,” and that it was allowed under the rules of the State Department.

Looking back, it would have been better if I had simply used a second email account and carried a second phone. Using one device would be simpler, but obviously it hasn’t worked out this way.

She also patted herself on the back for taking “the unprecedented step of asking the State Department to make all of my emails public” (what a gal!) and ensured the American people that “there were no security breaches.”

Here’s a video of a portion of the comments in which some dude with a foreign accent does Clinton the kind service of asking the perfectly idiotic question of whether this would have happened if she “were a man today.”

The only conclusion that can be drawn from Clinton’s remarks is that she needn’t have bothered. If the best she was going to come up with is “I didn’t do anything wrong” and “there’s nothing to see here,” she may as well have stayed in hiding.

On with the investigation!