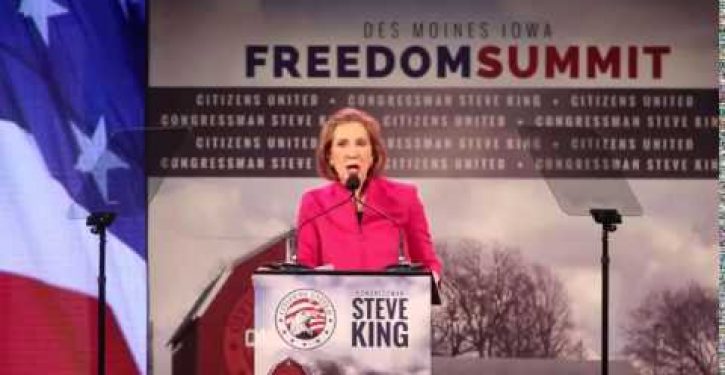 When Carly Fiorina was recruited to Hewlett Packard, she was the first woman to lead a Fortune 50 business and grew HP to the 11th most profitable company in the US. In her six years as Chairman and CEO of HP, she doubled its revenues to $90 billion; more than quadrupled its growth to 9%; tripled the rate of innovation to 11 patents a day; achieved market leadership in every product category; and quadruple cash-flow.

She currently serves as the Chairman of the American Conservative Union Foundation, which annually hosts CPAC (the largest annual gathering of conservatives); the Chairman of Good360, the world’s largest product philanthropy organization; and the Chairman of Opportunity International, the largest non profit micro-finance lender in the world giving out $6 billion at an average of $150 per loan lifting millions out of poverty around the world.

In 2014, Fiorina launched the Unlocking Potential Project, a new PAC aimed at engaging women voters and refuting the false notion that conservative ideas and principles amount to a “war on women.” The UP Project’s grassroots efforts aided Republican wins in crucial elections across the country, from Iowa to Colorado.

Q. As a potential presidential candidate you caught the media’s attention at the Iowa Freedom Summit last month when you said, “Like Hillary Clinton, I too have travelled hundreds of thousands of miles around the globe. But unlike her, I have actually accomplished something.”

Then you added this zinger: “Mrs. Clinton, flying is an activity, not an accomplishment.”

With those statements in mind, and as an accomplished professional woman, would you say you are more uniquely qualified to be harshly critical of Hillary Clinton than any of the male Republican presidential candidates?

A. It is my experience not my gender that qualifies me to comment on Hillary’s lack of accomplishments as Secretary of State.

Q. Speaking of the 2016 presidential contest, can you give us some insight as to why you are the only woman actively pursuing the Republican nomination?

A. At this point there is only one woman who is pursuing the Democratic nomination as well. I’m not running because I’m a woman, but the fact is I am a woman as are 53% of the voters.

Q. In 2010 you ran as the Republican candidate for the U.S. Senate in California. Your opponent was Democratic incumbent Barbara Boxer, who won with 52.2% of the vote to your 42.2%. However, you garnered 4.2 million votes, and your campaign raised over $25 million.Since that high-profile Senate race was your first attempt at public office, what were the lessons you learned that you would apply to a potential run for the presidential nomination?

A. First, a Conservative can unify the Republican Party and appeal to Democrats at the same time. Second, the ground game matters and winning an election is all about get-out-the-vote. Third, people are tired of politics as usual and are looking for leadership. Finally, I learned that I love to campaign. I find people fascinating and energizing.

Q. You founded and serve as chairman of the Unlocking Potential Project which promotes this mission statement:

Today, America suffers from self-inflicted wounds. Our nation has everything we need to lead, grow and prosper.

We must unlock the full potential of every American and unleash the power of this great nation. This requires:

If you happen to go for the presidential nomination and win the ultimate contest, how would you translate that mission statement into specific legislative and executive actions?

A. In order to unlock the potential of this great nation, and allow every American the opportunity to fully use their God-given gifts, we must fundamentally reform government. Our politics have been tinkering around the edges of government for too long. Our government is now too powerful, too costly, too corrupt; vast fed government bureaucracies have turn in on themselves and forgotten who they are intended to serve. Fundamental reform will require engagement from an active American citizenry, an understanding of the transformative power of technology, an understanding of how to transform bloated sclerotic bureaucracies and leadership that knows its highest calling is to unlock potential in others.

Q. During an Iowa debate in 1999, Texas Gov. George W. Bush, was asked to name the political philosopher or thinker with whom he most identified and famously answered, “Christ, because he changed my heart.”  In retrospect, many Republicans believed that moment marked the beginning of Bush’s harsh media treatment, which lasted throughout his presidency.

This is relevant because in a recent Christian Post  interview, when asked how your religious beliefs inform your political views, you responded, “I am a Christian. I believe that every one of us is equal in the eyes of God, and therefore, I know that everyone is capable of living a life of dignity, purpose and meaning.”

I share your faith. However, as a potential presidential candidate, are you concerned that overt expressions of Christianity in the national political arena could make you more of a target in a mainstream media that has traditionally been hyper-critical of Christian female Republican candidates?

Readers are encouraged to learn more about Carly Fiorina and her Unlocking Potential Project.

Were you a problem child? Find out by taking this simple test
Next Post
Rick Perry: 2016’s ‘borderline’ candidate?