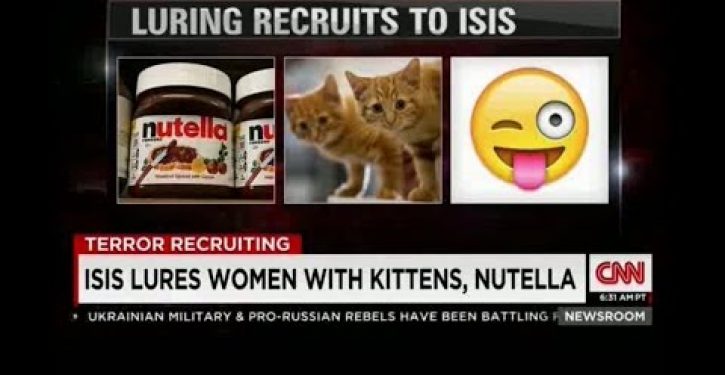 Apparently, CNN just can’t help itself.  Perhaps no one can find the “moron” switch and flip it to OFF.

On Wednesday, CNN anchorette Carol Costello introduced a segment on Islamic State recruiting with the now-infamous theme that the IS jihadis are luring Western women to their cause using pictures of kittens, promises of Nutella, and cute emojis on social media.

Lest you think this is a joke, the video is embedded below.  Consider it duly noted that her guest, Nimmi Gowrinathan, disagrees with Costello’s thesis, and apparently has now done so publicly, several times.  She seems like a polite person, so I’m sure her disagreement has been in the best possible taste.

The jihadis are having big fun with the Costello theme, however.  Your first Tweet of the Day:

Wished i had a cat! 🙁 pic.twitter.com/ORlbCHxH3G

One from an “American” jihadi:

All in good fun, right?  It’s certainly a melancholy thing to see these youthful, essentially Western-cultured guys — so much like their non-radicalized peers — shopping themselves out to a band of nihilist thugs in the name of a seventh-century death cult.

Give me their tweets and the National Counterterrorism Center and I can have these guys in the crosshairs in 72 hours.

Members of ‘Party of Civility’ make death threats against Rudolph Giuliani for questioning Obama’s patriotism
Next Post
Obamnesty still on track: Federal judge’s injunction will have no effect