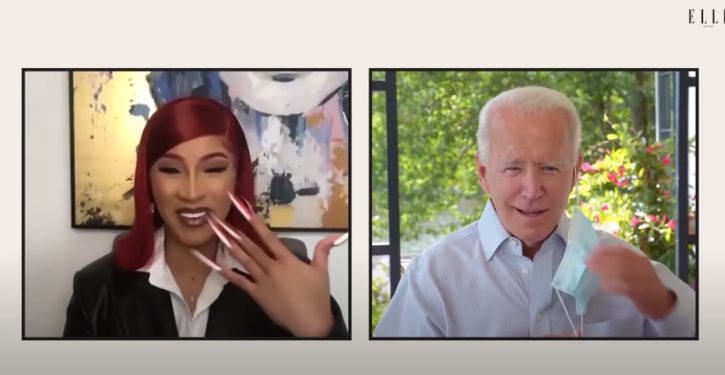 The Biden campaign has hidden the former vice president from serious journalists since he made the announcement that Kamala Harris would be his running mate. They won’t even allow questions after media events:

But even though Joe has no time for journalists, he did manage a few minutes to chat with the intellectual bright light that answers to the name Cardi B.

You remember Cardi B, right? She’s the stripper-turned-rapper who used to drug men and rob them. She’s known for her surgically-enhanced curves, long nails, stripper clothes, twerking, disgustingly lewd lyrics that she calls “female empowerment,” and bizarre, unhinged Instagram rants. Oh, and she doesn’t appear to be all that bright — after all, she backed Bernie in the primary.

Cardi B wants lower taxes but she also wants free stuff (despite having an estimated net worth of $24 million). She doesn’t seem to understand that those two things are mutually exclusive.

Check out what happened when she realized that she had to pay 40% of her income in federal tax because she had finally made it to the bigtime:

See, now that kind talk from Cardi B makes sense. But she’s also for Medicare-for-All, free college, and government-run childcare.

In a special piece for “Elle” magazine, a Zoom call was arranged between the former vice president and the rapper. They talked about getting Trump out of office, the pandemic, racial injustice, and police brutality, as well as her desire for a whole lot of government-provided “free” stuff.

The conversation began on the wrong foot and it was sort of a sign that it wasn’t going to go so well.

Joe Biden: How are you? The name’s Joe.

Throughout the Zoom call, the rapper kept referring to the former vice president as “Biden.” And Joe looked stunned.

The results also appeared to be edited:

Watch how the lighting and frame changes 3 times throughout this clip of one answer👀 pic.twitter.com/qEAF8KxLhw

Like a good candidate for high office Biden asked what issues were important to Cardi B and her fans. She reiterated her hunger for free stuff and said that getting Donald Trump out of the Oval Office is her number 1 priority. She said that she wanted “justice,” with tougher laws for police officers who killed black people, but the laws shouldn’t be “unfair” to black people, either.

But when it came down to paying for all of the freebies that she wants, she narrated a sob story meant to illustrate why that burden should fall on somebody else:

Because let me tell you about my college experience. I’m from New York, and when you’re in high school or middle school, they give you a free MetroCard for you to be able to get to your school, and they gave me free lunch. When I was in college, I didn’t get any more [free] transportation. So I had to get a job, because I needed $5 every single day to be able to go from Washington Heights to Chambers Street. And I had to feed myself. Sometimes I had to wait from 1 p.m. all the way to 9 p.m. to get home to eat. Because I couldn’t afford McDonald’s or any restaurants on my break. I was starving, and I felt so discouraged. So I just feel like that is so important, to finance students while they’re in college.

Inquiring minds want to know: Can Biden provide free universal college education, free health insurance, and other goodies without a big chunk of taxes coming out of their paychecks? “Yes, we can,” the Democratic nominee answered, showcasing his latest act of plagiarism, adding:

And the way we can pay for all of this is doing practical things, like making sure that everybody has to pay their fair share. [For example] no corporation should pay less than 15% tax.

It was at this point that a staffer jumped in and said that they were out of time.

You can watch the entire meeting of the minds here: