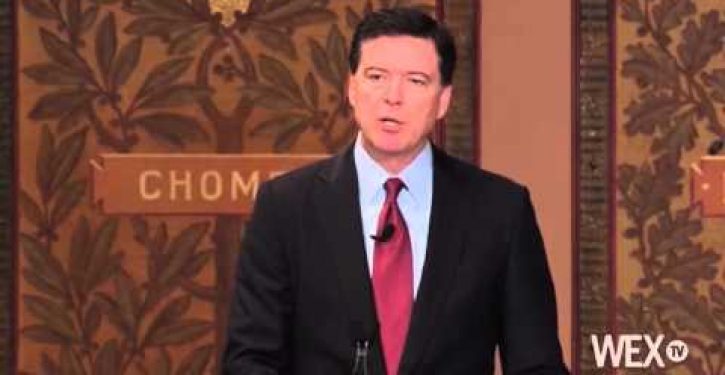 First, there was Eric Holder, Attorney General of the United States, declaring that all police have an unconscious bias toward “his people.” Then there was the wholesale treachery committed against New York’s Finest by the city’s ultraliberal Mayor Bill de Blasio, who is not black but plays on one TV.

Now the mantle has been passed to FBI Director James Comey, Comey summoned up his inner Al Sharpton during a speech at Georgetown University last Thursday, opining not only that all police officers are inherently racist, but also that because America is a “majority white society” we are helpless to control our “latent biases.” These tendencies in turn explain (of course) why government must step in and design a system to control our unconscious hatred.

Comey went on to accuse all cops, Caucasian or minority, who patrol areas “where most street crime is committed by young blacks” of also having an unconscious bias against blacks:

A mental shortcut becomes almost irresistible and maybe even rational by some lights. The two young black men on one side of the street look like so many others the officer has locked up. Two white men on the other side of the street — even in the same clothes — do not. The officer does not make the same association about the two white guys, whether that officer is white or black. And that drives different behavior. The officer turns toward one side of the street and not the other. We need to come to grips with the fact that this behavior complicates the relationship between police and the communities they serve.

The director’s position is nothing new and goes all the way to the top (bottom?) of the nation’s hierarchy. From his first days in office, President Obama and his administration have judged every issue through the prism of race. So why shouldn’t his hirelings?

Big Labor opposes bill that would allow employers to reward hard work without unions’ blessing
Next Post
Cartoon of the Day: Act stupidly, and carry a big (selfie) stick