After being given an opportunity to address the families of two murdered white teens, one of the black killers instead mockingly used the occasion to “apologize” for the deaths of Aiyanna Jones, Michael Brown, and Eric Garner during his sentencing hearing on Wednesday.

Fredrick Young, 25, and Felando Hunter, 23, were found guilty of robbing, torturing, and killing 18-year-old Jacob Kudla and 17-year-old Jourdan Bobbish in 2012, starting a “two-week rash of violence and killings that involved a total of seven men,” as reported at mLive. According to MyFoxDetroit, it all started when Young and Hunter “visited an uncle’s house, then went to a gas station looking to buy drugs.”

The bodies of the boys were found in a field after they had both been stripped of their clothes and shot execution-style, as also reported at MyFoxDetroit.

Additionally, 40-year-old Larry Anderson and 39-year-old Casey Jason Green, who both had their own criminal records, were “accused of theft and obstructing justice” in the case after they were found to have stripped Jacob Kudla’s vehicle and “wiped it down with bleach.” It was reported in April at the Washington Times that the pair “pleaded guilty to larceny, obstruction of justice and tampering with evidence.”

At the sentencing hearing, Jourdan’s mother was quoted as saying, “I have sorrow in my heart, soul and every fiber of my being today and I will carry that with me for the rest of my life here on earth.” Jacob’s mom said, “Not only did the defendant take away my son’s future,” she said. “He took away my future – my future as a mother – my future as a grandmother.”

Fredrick Young, however, showed no remorse. Mocking the families whose loved ones he murdered, he said:

I’d like to say sorry to the families of Aiyanna Jones, Michael Brown, Eric Garner. And I want to apologize to them for not being able to get justice for their loved ones who was murdered in cold blood — and in respect for the peaceful protest, I want to say hands up don’t shoot. Black lives matter — that’s it your honor.

Felando Hunter was already serving two life sentences, including one for the murder of John Villneff, a 62-year-old decorated Vietnam veteran who died as he was protecting his granddaughter. Hunter is also serving a life sentence for yet another murder, but the news coverage for this crime was scarce.

The only report this author could find aside from the above video was at mLive:

According to the Wayne County Prosecutor’s Office, Hunter and others entered a home at 7251 E. Congress and took captive Joshua Hayes, whom they forced to received oral sex from another Chanel McDonald, during which Hunter and another man, Jerry Pringle, shot the Hayes in the head.

Neither Chanel McDonald or Jerry Pringle was listed as a part of the gang of seven, however, based on coverage at MyFoxDetroit, who listed Felando Hunter, Fredrick Young, brothers Reco and Aquire Simmons, Michael Evans, Michael Montgomery and Brandon Crawford as those arrested in connection with the killing spree.

In fact, considering the severity of these offenses, it is surprising (or not) that these crimes have not been reported in the mainstream media, who are perhaps too busy with the “Bonnie and Clyde” story to bother.

According to mLive, “The other suspects involved have been prosecuted and are serving sentences ranging from 12 years in prison to mandatory life.”

Both Young and Hunter were sentenced “to life in prison without parole.” 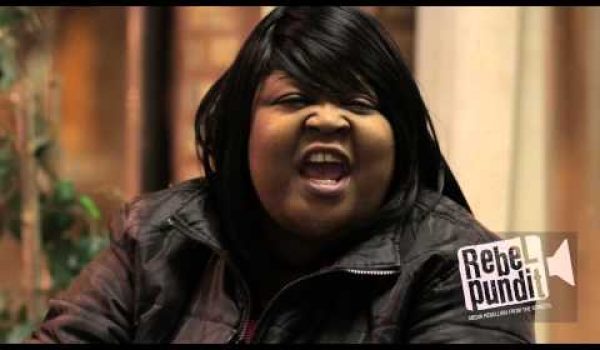