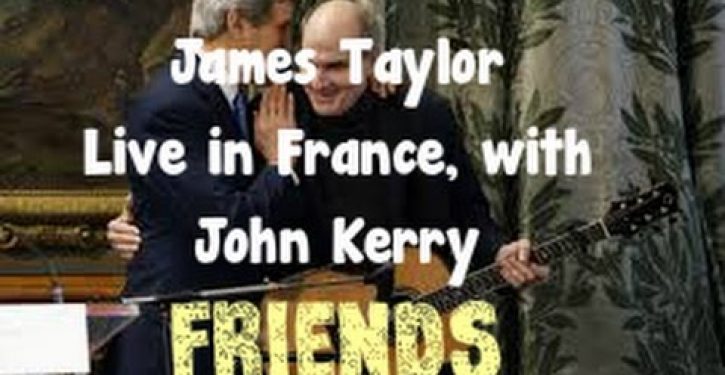 Remember the item pictured at the left? It was presented in March 2009 by newly minted Secretary of State Hillary Clinton to Russian Foreign Minister Sergei Lavrov. Based on an American TV commercial, the notion of a “reset button” would have been lost on Russia anyway, but to add insult to embarrassment, the Russian word peregruzka doesn’t translate to “reset.” Instead it means “overcharged,” as Lavrov told a red-faced Clinton.

Not to be outdone by his predecessor, current Secretary of State Jean François Kerry journeyed to Paris yesterday to make nice with the French for his boss’s indiscretion last weekend, when he failed to join some 50 of his superiors on the world stage in a mass condemnation of radical Islam. But Kerry’s reset button was even more symbolic than Clinton’s — downright cerebral in fact. He carted along with him aging songster James Taylor to sing his timeless 1971 hit “You’ve Got a Friend.” Get it?

Unfortunately, as the video reveals, it took Taylor an inordinately long time to tune his guitar:

But the real fun came later on Twitter. As chronicled by Twitchy, first there was incredulity:

@mitchellreports @JohnKerry This is a joke, right. I mean this has to be a joke. Please tell me this is a joke.

@mitchellreports @JohnKerry you picked this scoop up from the The Onion, right?

Then came the digs:

If there is a bright side for the administration in any of this, it’s that Kerry didn’t attempt to “name that tune.” The last time he did, he made a pretty big mess of it.