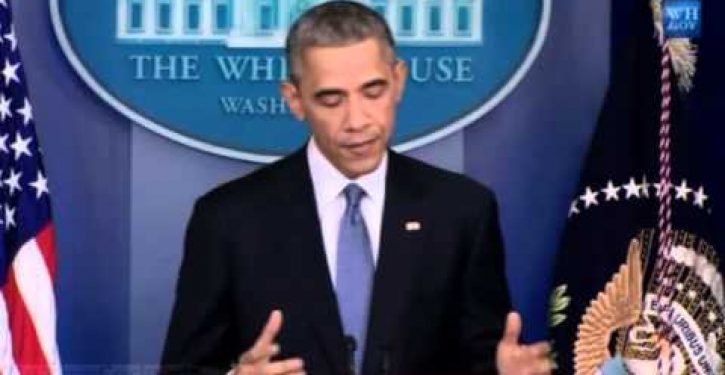 Democrats, led by President Barack Obama, openly sneered at the idea of increasing domestic oil production to stem rising gasoline prices. Now that those prices have plummeted to $2 a gallon, they’re singing a different tune — and taking credit for it.

“That’s a bumper sticker. It’s not a strategy to solve our energy problems,” Obama said of the GOP’s “drill, baby, drill” battle cry. “We can’t just drill our way to lower gas prices.”

“‘Drill, baby, drill’ won’t lower gas prices today or tomorrow,” Rep. Janice Hahn (D-Calif.) said on the House floor in 2012. “But it will fuel our addiction to fossil fuel.”

And then there was this from the president, according to Fox News:

“They were waving their three-point plans for $2-a-gallon gas,” Obama told a laughing audience during an energy speech in Washington. “You remember that? Drill, baby, drill. We were going through all that. And none of it was really going to do anything to solve the problem.”

Despite efforts by Democrats to curb America’s dependence on fossil fuel and rely instead on solar and wind to meet its energy needs, oilmen have slogged ahead and managed to actually increase domestic oil production — substantially.

“Of course [Obama] was wrong. We’ve seen oil prices fall internationally now by half since last June,” American Enterprise Institute economist Ben Zycher told Fox. “The U.S. is now the biggest oil and gas producer in the world, or almost that, and the effect has been to drive prices down as we’ve seen.”

So how were oil producers able to achieve this miracle? Fox reported:

The gains, according to oil experts, come off private, not federal, lands.

Oil production on federal lands — those under the president’s control — fell 6 percent since 2009, according to the federal Energy Information Administration, while production on private lands increased 61 percent.

And now Obama wants to take a bow for gas prices being cut in half and injecting billions into the economy. Suddenly “drill, baby, drill” is no longer a “bumper sticker” — it’s an energy policy, and one that works.

Zycher, who served on Ronald Reagan’s President’s Council of Economic Advisers, said it was “rather disingenuous for the president to take credit for the decline in oil prices and gasoline prices and the increase in incomes generated by increasing production.”

“It’s somewhat amusing,” he added. “He’s taking credit for an increase in production that has happened largely on private land and had nothing to do with federal government policies.”

Here is Obama in a speech in December attempting to claim credit for lower prices at the pump.