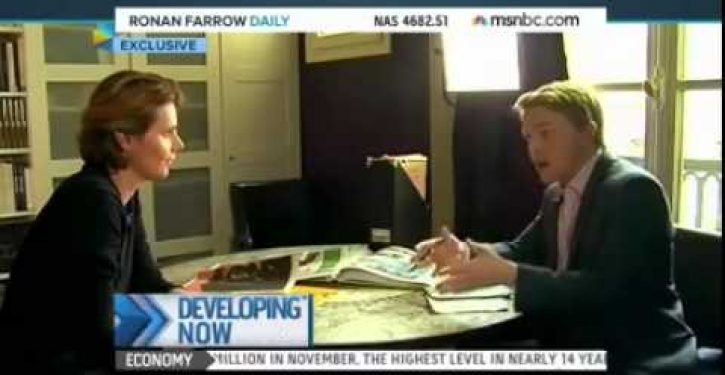 During MSNBC host Roman Farrow’s interview with a Charlie Hebdo contributor, the network chose to blur a cover of the magazine depicting Mohammad, a move that the contributor called “the saddest news” and Farrow’s own mother denounced as “dispiriting.”

MSNBC’s decision to blur the image was even predicted by the contributor, Caroline Fourest, as the magazine was being displayed during Tuesday’s airing of “Ronan Farrow Daily.”

“Then we had some other cartoons, more Charlie Hebdo, like this one,” she told Farrow, “that I know because we are in America, you are probably going to blur it, which is just crazy.”

And just as predicted, the network blurred the image so much that viewers couldn’t tell if they were looking at a cartoon image of Mohammad or Mary Magdalen.

Farrow tackled the issue head-on and said to Fourest:

So let’s talk about that. It’s a debate going on in newsrooms around the world, and it is true, many stations including NBC News have decided they will not show some of those covers that are most offensive, particularly in their depictions of the Prophet Muhammad. What’s your response to that?”

“I think it is the saddest news I’ve heard in this all of this incredibly moving mobilization around Charlie Hebdo,” Fourest said.

Dispiriting that some TV news stations in the US are not showing the new #CharieHebdo cartoons. When we back off, the terrorists win.

*UPDATE* Not all networks are afraid to show the cover in hi definition. Fox News host Greta Van Susteren displayed the cover of the latest issue of Charlie Hebdo in all its glory.

(h/t: Twitchy and The Daily Caller)

69 dead from drinking bad beer in Mozambique; crocodile involved
Next Post
Podesta to leave White House for a job with Hillary