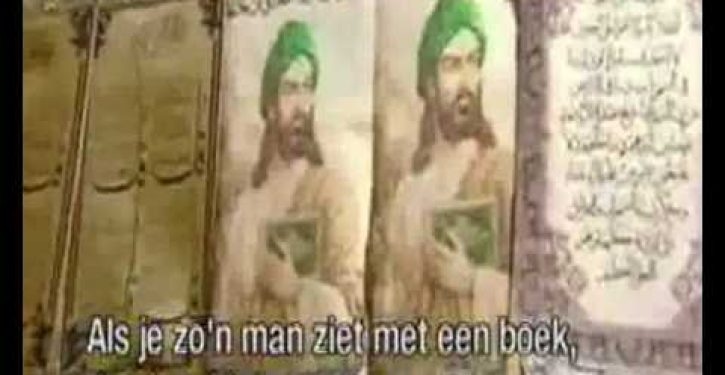 My wife Sylvie, who grew up in France, is terribly shocked about Wednesday’s terrorist attack on the French satirical weekly Charlie Hebdo, which murdered 12 people, including four prominent French cartoonists.

Its editor had been on an Al Qaeda hitlist, and this vicious attack was immediately cheered by supporters of the Islamic State and Al Qaeda. “Minutes before the attack, the Charlie Hebdo account had tweeted out a cartoon mocking the Islamic State’s leader, Abu Bakr al-Baghdadi.”

My wife calls the attack “France’s 9/11,” and says Charlie Hebdo was a symbol of free speech for the French people, and much more culturally significant than publications like National Lampoon or The Onion are for Americans. French people across the political spectrum, from left-wing Trotskyites like my father-in-law, to conservative Gaullists, were appalled by the attack.

The slain cartoonist Cabu was not just a Charlie Hebdo cartoonist, but had also, years earlier, been perhaps the leading cartoonist of Sylvie’s childhood. He drew cartoons for children, such as for “the children’s TV programme, Récré A2,” making his murder as culturally significant for her as it would be if Charles Schultz, the creator of Peanuts and Charlie Brown, had been assassinated.

But most of the media are too cowardly to do so (which they should be doing, because doing otherwise rewards the terrorists who sought to eradicate such depictions). Instead, many are cropping historical photos, or blurring out images, to censor depictions of the prophet Mohammed found in newsworthy photos of Charlie Hebdo and its staff. Some are even effectively blaming Charlie Hebdo for the attack, like Tony Barber of the Financial Times referring to it as “being stupid” and aiming to “provoke Muslims.”

By contrast, Charlie Hebdo’s staff showed incredible courage over the years. As Matt Welch of Reason notes, it had the courage to not “just print original satirical cartoons taking the piss out of Islamic-terrorist sensibilities, but do so six days after [it was] firebombed . . .and do so in such a way that’s genuinely funny (IMO) and even touching, with the message ‘Love is stronger than hate.’” And not “just print original cartoons of the Prophet Muhammad—a historical figure, lest we forget—but then defending and winning the right to do so after being charged with offensive speech.”

The censorship by much of the media is lamentable. As columnist Ross Douthat observes at The New York Times:

If a large enough group of someones is willing to kill you for saying something, then it’s something that almost certainly needs to be said … it’s precisely the violence that justifies the inflammatory content. … if publishing something might get you slaughtered and you publish it anyway, by definition you *are* striking a blow for freedom, and that’s precisely the context when you need your fellow citizens to set aside their squeamishness and rise to your defense.

Yet, as the Cato Institute’s Walter Olson noted on January 8, “As for the present day, CNN, NYT, AP, NBC, ABC, the BBC, Guardian, Telegraph, and the CBC, will *not* be running Charlie-Hebdo cartoons . . . No UK paper on Thursday morning runs the cartoons on its cover — though the Berliner-Zeitung in Germany publishes a full spread of them.”

It’s understandable to not want to be attacked like Charlie Hebdo, but few of them even criticized the threats against Charlie Hebdo over the years.

“So many of Charb’s fellow journalists have long been aware of these threats, and have said nothing,” writes Mark Hemingway in the Weekly Standard.

In America, too, the Society of Professional Journalists and the American Society of News Editors had nothing to say when a Seattle journalist was driven into hiding by death threats after she proposed the idea of “Everybody Draw Mohammed” day.

As Jytte Klausen, author of a book on the Danish cartoon episode, noted in Time: “Over the past five years, [the editors of Charlie-Hebdo] have been left alone standing in defense of press freedom.”

As Walter Olson notes, France’s government sent the wrong signals to extremists in the years preceding this attack: “The French government repeatedly pressured Charlie Hebdo not to go so far in giving offense. The government of Jacques Chirac stood by at, or by some accounts even encouraged, a court action aimed at fining the magazine for having offended some Muslims. Then-British foreign minister Jack Straw . . . blasted re-publication of the cartoons as ‘insensitive’ and ‘disrespectful.’ And if you imagine the leaders of the United States did much better, here’s another Christopher Hitchens column on how mealy-mouthed they were at the time in the cause of the intellectual liberty that is supposed to be among America’s proudest guarantees.”

Associated Press spokesman Paul Colford stated that “None of the images distributed by AP showed cartoons of the Prophet Muhammad. It’s been our policy for years that we refrain from moving deliberately provocative images.”

By “provocative,” this disingenuous AP spokesman means images that might provoke violence against the AP, not violence against others. However, the AP has certainly published provocative photos and stories (sometimes accurate, sometimes slanted) that lead to race riots or other forms of violence against people other than the Associated Press itself.

When inflammatory images are factually true, or are necessary to explain what a controversy is about, the press generally should publish them, to keep the public informed. For example, the resulting anger can fuel movements for essential reforms. As the Supreme Court observed in Terminiello v. Chicago (1949), “a function of free speech under our system of government is to invite dispute. It may indeed best serve its high purpose when it induces a condition of unrest, creates dissatisfaction with conditions as they are, or even stirs people to anger. Speech is often provocative and challenging. It may strike at prejudices and preconceptions and have profound unsettling effects as it presses for acceptance of an idea.”

By refusing to reprint anything depicting Mohammed (even those that depict Mohammed in order to ridicule Muslim extremists, rather than satirize Mohammed himself), the Associated Press is effectively giving a heckler’s veto not to Muslims in general, but to the extremists, which makes it even more censorial.

People like New York Times executive editor Dean Baquet have sought to justify such censorship by arguing that it is offensive to Muslims to depict the prophet Mohammed in any form because Islam bans this, but that is not true. Nothing in the Koran forbids such depictions (although the collection of Islamic traditions known as the Hadith, which Muslims recognize as not being infallible, is so interpreted by some Muslims). In fact, many historical Muslim rulers in Iran, Afghanistan, Turkey, India, and Central Asia actually commissioned artists to paint the story of Mohammed’s life—complete with pictures of Mohammed himself—in centuries past. Depictions of Mohammed can be found in marketplaces throughout Iran, which is populated by Islam’s Shi’ite branch. In 2010, Omid Safi, an Iranian-American professor, published an op-ed entitled “Why Islam does (not) ban images of the Prophet,” in which he described his attachment to a picture of Mohammed, which was a family heirloom.