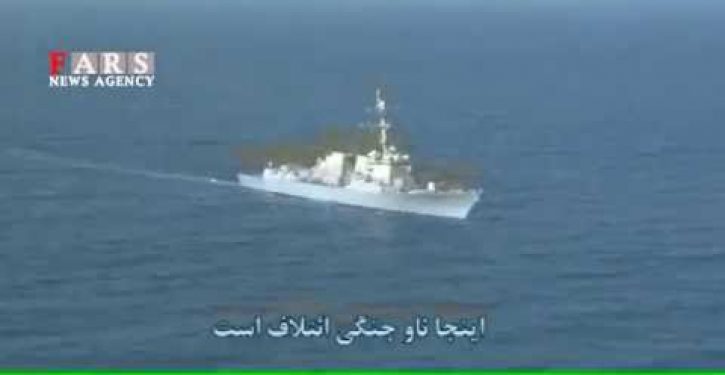 Everybody take a deep breath.

The Iranians have put out a very short video clip, about 30 seconds in duration, which they are using to imply that when they ordered a U.S. Navy destroyer out of their naval exercise area, during the major Iranian exercise at the end of December, the destroyer ignominiously left.

Most reactions to this have at least maintained a healthy distance from the Iranian narrative, if not exactly a true skepticism.  The Iranian regime is, after all, an inveterate purveyor of silly, deceptively edited videos.  But there are other good reasons to be skeptical of this one.

The first reason is that the video presented by Iran doesn’t show any such thing happening.  We can’t actually tell from the video, which is an edited series of clips, what happened.  MEMRI has the full video from Iranian TV, with subtitles.

The Aviationist (David Cenicotti) has a shorter, focused clip in which we can hear very brief snatches of tactical communications between the U.S. destroyer (USS Gridley, DDG-101) and an Iranian patrol aircraft.

I can’t entirely make out what the ship is saying, but I can make out “this is coalition warship,” and something about “zero niner zero,” which would refer to either a course or bearing of 090, or 90 degrees on a compass.  It would not, however, refer to the ship’s course.  I’ll explain that in a minute.

It’s important to realize it, because the implication of the edited video seems to be that there is a discussion of the ship’s course between ship and patrol aircraft, and then the pilot of the aircraft signals with his hand, for the benefit of those in the aircraft, to indicate he expects the ship to turn right, or is telling it to.  The next thing we see is video of the ship with a wake behind her indicating a right turn.

Now, you can already imagine how easy it is to edit video to create this narrative in the viewer’s mind, even if nothing even remotely close to it actually happened.

But there’s a good reason to doubt the entire constructed scenario, because the bridge crew of the U.S. Navy destroyer wouldn’t discuss the ship’s course with the patrol aircraft to begin with.  There’s an important reason for that, too.

Naval seamen follow very specific national policies on what they say in tactical communications with foreign militaries, and a challenge at sea or in the air from a non-allied foreign military is one of the most scripted events there is.  I mean that literally: there’s a script.  Bridge talkers are drilled in using the script so that they don’t get flustered and deviate from it.  Besides maintaining a rigorous courtesy, they must set no precedent of responding to inappropriate questions or volunteering information unnecessarily, and against policy.  Every interaction must proceed as if the conventions that underpin freedom of navigation and safety at sea depend on it.

That’s why a ship like USS Gridley, operating with a given chain of command in the Gulf of Oman, would communicate in a tactical exchange with an Iranian patrol aircraft as “coalition warship.”  The crewman doesn’t say “this is USS Gridley,” or even “this is U.S warship.”  The speaker says “this is coalition warship.”  Watch the first minute of this next video, from an encounter with Iranian small boats in 2008, to hear the standard tactical communication from one of our ships speaking to an Iranian, non-coalition/non-allied ship at sea.

The bridge crew doesn’t state the ship’s course to its foreign interlocutor, nor will it respond to orders to change course with any discussion of specific courses. That would set an undesirable precedent.

So the reference to 090 is not to the Navy destroyer’s course, current or intended.  It may be to the Iranian patrol aircraft’s relative bearing from the Navy destroyer, which appears, at one point during the video, to be approximately 090.  It could also be to the aircraft’s course.  When hailing an aircraft which has not identified itself, or with which the ship is not yet in acknowledged two-way communication, the ship may address the aircraft by identifying it through its position relative to the ship (including altitude) and/or the aircraft’s course.

But we don’t know when in the interaction the brief audio clips we hear occurred.  For all we know, they were unrelated to the video sequence we see, and were merely overlaid on the video by the editors after the fact.

We do know that the Iranian authorities have been talking big since before the exercise about excluding foreign ships from their exercise area.  It’s a very large area, stretching from the Strait of Hormuz all the way down to the Gulf of Aden, and it’s therefore completely unrealistic to proclaim that foreign ships should stay out of it.  But given that the Iranians have been flogging this theme, making up stories about chasing foreign warships out of the area would amplify it.

I have no doubt that there were tactical communications between Iranian patrol aircraft and coalition warships, including USS Gridley, during the exercise.  Such comms occur all the time.  The Iranians are as experienced in talking to our (coalition) ships and aircraft as we are in talking to theirs.  They are well aware of what the conventions are.

They know that a U.S. Navy destroyer isn’t going to get into a discussion about changing course or leaving an area because of a warning from a patrol aircraft.  They’ve merely edited a video to make it look like that’s what happened.  They’re counting on the public’s credulity and lack of expertise.  If they had video indicating that it really did happen, I have no doubt they’d show us the whole event.

One other point.  If the Iranians declared one or more maritime hazard closure areas for the exercise period, as a warning that there would be live fire in those areas, the U.S. and other coalition warships probably did what they could to deconflict their planned operations.  This is another thing that happens routinely, and as long as countries don’t abuse the privilege of declaring such closure areas, the areas are respected by others, without any threats or coercion required.  Warning of a navigation hazard, and avoiding hazard areas, are simply good seamanship.

Declaring closure areas is not the same thing as sending out forces to chase foreign warships away from a particular location.  Nothing in the video demonstrates that the Iranians succeeded in chasing anyone away.