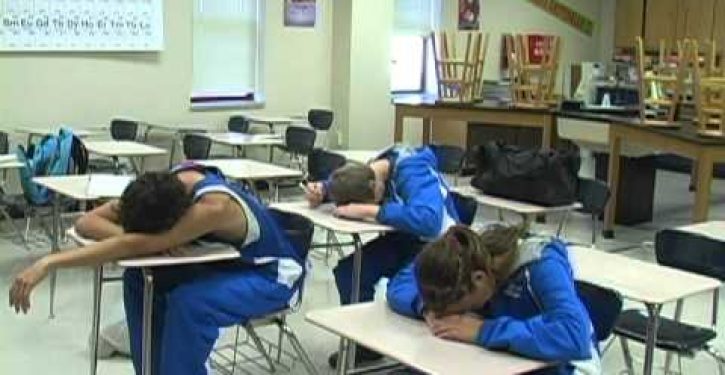 School dietitians are discovering a rather basic fact of life. No matter how nutritious a food item may be, if no one eats it, no one will receive its purported benefits. Republican lawmakers are taking note and placing the issue on their 2015 agenda.

And it’s all in keeping with traditional principles of freedom of choice and personal responsibility.

Actually, they already took a “baby step” on the issue during the closing days of the 113th Congress.

“The $1.1 trillion omnibus this month included provisions to allow states more flexibility to exempt schools from the Department of Agriculture’s whole-grain standards if they can show hardship and to halt future sodium restrictions,” reported Politico.

Both Kline and Roberts have been openly critical of the 2010 Healthy Hunger-Free Kids Act, a bipartisan law that included many reforms that are now sparking complaints among schools and Republicans who argue the rules are too prescriptive and costly.

Almost from the outset cafeteria workers and students alike have rebelled against the new school lunch regulations limiting sodium, sugar. and fat.

Kansas high schoolers voiced their grievances via YouTube two years ago by producing and publishing this video titled, “We Are Hungry,” according to The Huffington Post.

More recently, students in Kentucky told the First Lady her food “tastes like vomit,” while others have taking to posted photos of their school lunches on Twitter, along with the hashtag #ThanksMichelleObama. Here are a few examples:

Had a very #healthylunch today. The apple definitely made up for the “mystery mush” #ThanksMichelleObama pic.twitter.com/RWCnQRCxJK

This is my lunch. I’m in high school. #ThanksMichelleObama pic.twitter.com/02t4MScBIe

And it’s not just the students who complain. Food service personnel point out the waste of seeing food go directly from the serving line to the trash bin.

SNA’s ask to drop a mandate that kids take a half cup serving of fruits or vegetables, in particular, is expected to be a big fight, as the move is strongly opposed by nutrition advocates, the White House and the produce industry, which is seeing big gains in produce sales into the program.

SNA argues that the requirement has led to skyrocketing waste and costs, contributing to financial woes for many school nutrition programs. Battle lines will also be drawn on new nutrition standards on all food sold in schools, including vending machines and a la carte lines — standards that in some cases have led to lost revenue for schools — and debate will continue on whole grain and sodium requirements.

“The Food and Drug Administration has acted recklessly, mandating regulations without considering the impact they will have on American employees, business owners, and our economy,” [Congresswoman Cathy] McMorris Rodgers said in a statement. “Adhering to these burdensome requirements will be extremely costly — in both time and resources — for restaurants, grocery stores, delivery chains, and movie theaters across the country.”