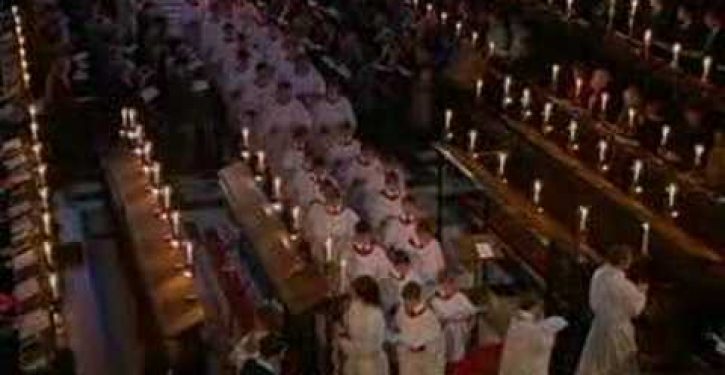 Although there is much turmoil in the world, LU Nation, we are in a season of light, joy, and peace.

I hope a selection of images and music will be an encouragement to each one of you.  As you’ll see, we stand athwart current events just a bit in this post, calling out “Merry Christmas!” against the storm.  There’s also a shout-out to the troops – some of whom will be home for the holidays because of the drawdown from Afghanistan; others of whom will still be standing the watch on distant shores.

We start with a favorite hymn from the Advent season, just before Christmas, coming to us from King’s College, Cambridge in the UK.  (This one’s really for my mother, but I think others out there will enjoy it too.)

One of the most painful American episodes of the last decade occurred in Brooklyn this year, just before Christmas, when a gang thug from Baltimore ambushed and murdered NYPD Officers Rafael Ramos and Wenjian Liu.  Our prayers are with the officers’ families, and all the law enforcement officers and their families across America, as they try to recover from this terrible event, and find their footing to move forward.

But we can rejoice that the murder of two police officers does not reflect the spirit of Brooklyn, a unique borough that in many ways represents the heart and legacy of America.  A truer ambassador is the Brooklyn Tabernacle Choir, with its delightful and distinctive sound.  Here is the choir singing “Carol of the Bells.”

One of the best things about Christmas is that it is celebrated in every corner of the world.  Each culture has contributed something to the riches of Christmas.  The import from Nigeria in the next video has become an American favorite.  Here is an African children’s chorus singing “Betelehemu” (“Bethlehem”).

No Christmas should go by without Bing Crosby singing Irving Berlin’s “White Christmas.”  For this special performance, Crosby is joined by a rather famous associate.

Speaking of which…time for a tribute to the troops.  Many of us have full hearts this Christmas as our men and women in uniform return to us.  Others are praying for the safety of the ones far away.  Still others pause, along with comrades and shipmates past and present, to remember the ones who didn’t come back.

Christmas is a special time for the troops, wherever they are.

Troops in Iraq pose in 2009 with Christmas stockings packed for them by Adopt a Platoon.

Navy Lieutenant Jon Sunderland dresses as Santa to direct traffic on the flight deck of USS Nimitz (CVN-68) on Christmas Day in the Persian Gulf.

Air Force Loadmaster TSgt Mike Morris, 816th Expeditionary Airlift Squadron, makes like Santa as he loads a fuel pallet on a C-17 Globemaster for delivery to forces in Afghanistan in 2013.

The iconic song “I’ll be home for Christmas,” written by Kim Gannon (lyrics) and Walter Kent (music), was first sung by Bing Crosby in 1943, and immediately became a popular favorite.  The video here is set to the Johnny Mathis version from 1958.

Few songs are as beloved in Christmas Eve services as the “Cantique de Noel,” or “O Holy Night.”  Here is the group Celtic Woman with their angelic version from 2009.

Images of the Nativity in Bethlehem have been painted, chiseled, modeled, and set in glass and mosaic tile for centuries.  Political activists try to erase these images from modern America, but for those who celebrate Christmas, the image of the Nativity is a link with brothers and sisters across time: across continents, across seas, across centuries of winters in which wondering peoples have remembered a humble birth, under the same stars watched by each generation in the night sky.

Nothing accompanies a Nativity scene better than Handel’s “For Unto Us a Child is Born,” from the oratorio The Messiah.  But there’s a twist with this one.  Let’s just say this performance stands athwart another of our recent political eruptions, singing “In your face” – in the gentlest and most joyful way – to the Kim regime north of the 34th parallel.  Prepare to have your socks blessed off.

We close with one more standing-athwart, this one in response to President Obama’s capitulation to the Castro regime in Cuba last week.  However ill-considered that move, the celebrants of Christmas know that the Castros are a weak and transient problem.  What’s enduring is the God-given endowments of the Cuban people: their spirit and artistry that can’t be beaten down by totalitarian despotism.

God bless us, every one.