The calls for New York Mayor Bill de Blasio to step down are getting louder. And if that’s not impetus enough to get him to resign, then maybe he should face the fact that it’s not just his critics on the right who are demanding his ouster. A petition at the heavily left-leaning MoveOn.org has garnered 58,329 signatures as of mid-morning Monday.

The text accompanying the petition, which was drafted the day New York police officers Rafael Ramos and Wenjian Liu were brutally executed, reads:

Today, Saturday December 20th 2014, 5 days before christmas [sic], 2 NYPD officers were shot and killed in their cruiser for no apparent reason.With the recent news surrounding the NYPD and other law enforcement agencies around the country, our mayor blasted his own police department by throwing them under the bus. His words and actions on the subject matter of late have to be held accountable. He is unfit to lead this city. He is unfit to have a relationship with his police department for his remaining tenure and he should be taken out of office IMMEDIATELY, with proper protocol to be followed to name a replacement before a special election.

The reference to de Blasio’s “throwing” his police force “under the bus” harks back to comments he made on Dec. 3, following the grand jury decision not to indict a New York City police officer implicated in the death of Eric Garner. Expressing concerns for the safety of his son Dante (pictured right), the mayor went on to say, “We’re not just dealing with a problem in 2014, and we’re not dealing with years of racism leading up to it or decades or racism. We are dealing with centuries of racism that have brought us to this day. That is how profound the crisis is.” A video of that portion of his prepared remarks appears below.

The comments were met, understandably, with outrage by Patrick Lynch, president of the Patrolmen’s Benevolent Association, and with rank-and-file members of the NYPD. But de Blasio was guilty not only of a sin of commission but one of omission. When a group of “peaceful protesters” paraded the streets of his city, chanting, “What do we want? Dead cops! When do we want it? now,” he chose to remain silent. As a result, he has received a vote of no confidence not only from his police force but from the people of New York.

It is time for him to go. 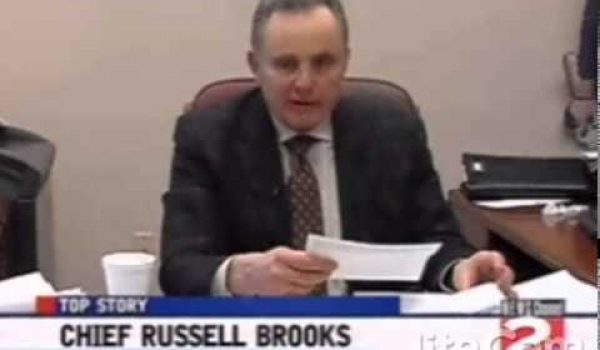