Sometimes anti-Semitic claims are so outrageous that if people didn’t actually believe them, one might think they came from a comedy act. This interview with Jamal Al-Din Ibrahim on Egyptian TV falls into that category. Ibrahim claims that ISIS was created by John McCain, that its initials stand for “Israeli Secret Intelligence Service,” and the head of ISIS, Abu Bakr Al-Baghdadi, is a Jew whose real name is Simon Elliot. Sadly the interview was all too real.

A video of the Jamal Al-Din Ibrahim interview (who claims to be a former University of California professor) was translated by MEMRI:

Interviewer: Thank you for bringing the film we just saw to our attention. The film [about ISIS] should serve as a message to all Egyptians, and the best part is that it was made by America itself. It is clear that he Americans decided to recognize that ISIS is Jewish-made, or Zionist-made, and that it got out of American control.

Ibrahim: This has become common knowledge for American intellectuals, but not for the average American.

Interviewer: You are a University of California professor…

Interviewer: But still, you have a vast knowledge of culture, and it was your love for this country that drove you to discuss this. It is a kind of a warning bell. […]

Ibrahim: ISIS has two meaning – an over meaning and the true meaning. On the face of it, ISIS means “Islamic State of Iraq and Syria.”

Interviewer: This is how they called it at the beginning.

Ibrahim: Yet the same acronym can stand for “Israeli Secret Intelligence Service.” […] This information comes from Edward Snowden, who is now a wanted man…

Interviewer: That’s the guy from the NSA…

Ibrahim: Exactly. He said that this was a means to drag the Arab world into a quagmire, and at the same time, to get rid of all the terrorists in a clever way, in keeping with the ways of British intelligence. […] This is a picture of Abu Bakr Al-Baghdadi, right? That’s his picture with John McCain, right?

Ibrahim: And that’s his picture with various Arab organizations… Isn’t that his assistant, Muhammad Noor?

Interviewer: Yes, on the right.

Ibrahim: Show us the previous picture again. There’s something fishy there. That’s his meeting with John McCain.

Interviewer: Yes, from about two years ago.

Ibrahim: The guy with the camera is [Baghdadi’s] assistant, Muhammad Noor.

Ibrahim: This proves that John McCain was establishing ISIS two years ago, when the Syrian revolution started. That’s him over there. ISIS leader, Abu Bakr Al-Baghdadi…

Ibrahim: He gave them the money to start ISIS.

Interviewer: It was done with American money.

Ibrahim: That’s the same guy. Oh, my. This guy with the beard is, in fact, Simon Elliot the Jew. Exactly. He was trained by the Mossad…

Interviewer: To become the Muslim Caliph. 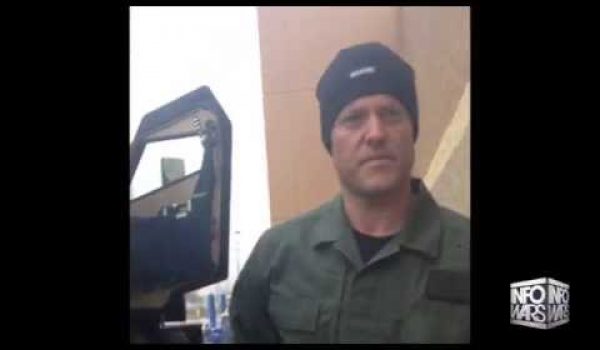