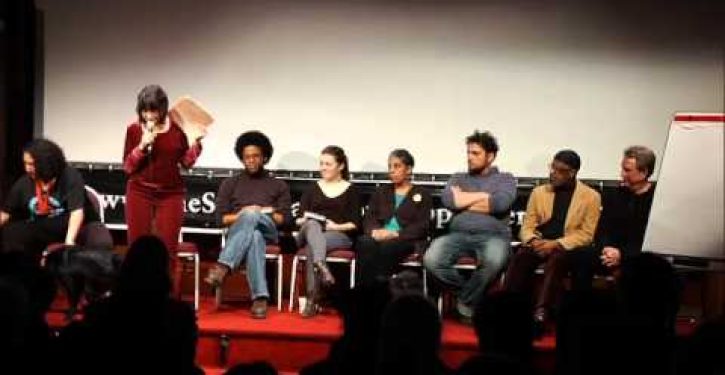 An Albany group proclaiming “solidarity” with protesters in Ferguson organized a rally with members of the Weather Underground back in 2012.

The earlier rally, designed to teach Occupy Albany members tactics and motivations used by the radical group, included guests who served significant sentences for bombings and robberies that led to the deaths of several police officers.

Last night, local activists conducted a march to City Hall in Albany as a way of bonding with the protesters and looters in Ferguson, Mo.

The event was organized in part by the Albany Social Justice Center and its director, Victorio Reyes.

Via the Oneida Dispatch:

Reyes said there are two justice systems in the United States – one for the privileged, who are mostly white, and one for those who lack class privilege and are mostly black and brown.

“If every black American in prison received the type of treatment Officer [Darren] Wilson received during the grand jury proceedings, our prisons would be barren, vacant shells,” said Reyes.

Reyes was in attendance at a 2012 event organized by the Albany Social Justice Center in Troy, N.Y.

Occupy Albany announced that event in March of 2012 called “The Weather Underground Meets Occupy Wall Street.” The event was co-sponsored by the Sanctuary For Independent Media and the Albany Social Justice Center.  It had been described as a book event and multi-generational dialog to celebrate U.S. political prisoner David Gilbert’s new memoir, “Love and Struggle.”

Gilbert is currently serving time in the Auburn Correctional Facility and is described as “an American radical leftist organizer and activist.” He was imprisoned for his role in the Brinks Robbery of 1981, a botched effort that led to the murder of four people, including a security guard and two police officers.

Here is a copy of their promotional poster for the event.

When the meeting actually took place, a video released by the group shows that the forum featured characters that were anything but mundane book reviewers, the list reading like a veritable who’s-who of former Weather Underground activists.

Not simply low-level members, but some of the more notorious radicals in the movement, these were men and women with ties to the infamous Bill Ayers and to bombing schemes on military servicemen, and of course, convicted cop-killers.

Reyes spoke at the event, but was far from the most prominent guest.

All of the above named have been involved in the more radical elements of the group, including assaults on police officers, bomb plots, and murders.

Jaffe was the master of ceremonies at the event, having been one of thirteen people indicted on charges to commit bombings and murder in 1970.

Smith herself was reading excerpts from a book written by David Gilbert. In the midst of her chosen excerpt Smith played the crowd, making a joke about Rush Limbaugh involcing a statement about ‘liberating’ a female speaker ‘with my c**k.’

When referencing a report being presented at an SDS workshop, Smith read:

“… when Marilyn Buck took the stage to do so, all hell broke loose. Men hooted and whistled from the floor, threw paper planes at Marilyn, and shouted such gems as quote, “I’ll liberate you with my c**k,” end quote.”

At which point Smith added, “Rush Limbaugh was not there, so…”, a statement which received hearty laughter from the crowd.

Smith, Reyes and other radicals from the past are all about the criminal first, law enforcement last. Their views show they would have accepted nothing less than a conviction of officer Darren Wilson in Ferguson. And they would have been perfectly content if Michael Brown had succeeded in getting Wilson’s gun and pulling the trigger first.

But you will never read about this in the media. They are presented as peaceful protesters concerned about ‘racial issues’ while their past associations are completely glossed over.

Cartoon of the Day: Who gives a loot?
Next Post
Man who threatens to shoot family dog kills himself by accident instead