I confess: The Onion and its spinoffs on the web can be fun to read. Even more fun, though, is doing a Google search after the fact to see which hapless tools got caught in the satirical net by mistaking a spoof for a real news story.

The latest victim is comedian D. L. Hughley and several thousand of his million-plus fans on Facebook, all of whom took seriously a story at the Daily Currant, which began:

Sarah Palin said today that illegal immigrants from Mexico should be put on boats and sent back across the ocean to their home country.

In an interview with Fox News tonight, the former Alaskan governor was asked about President Obama’s new plan to partially legalize some of the estimated 11 million illegal immigrants in America. Palin dismissed the president’s idea as “amnesty” and offered an  unconventional solution of her own.

“If I were Obama I’d put all 11 million of these folks on boats and send them back to Mexico,” she opined. “The liberal media says it’s impossible to deport that many people. But I say we can do it if we have enough ships.

Palin is one of the Currant’s favorite targets, mainly because the left is so ready to believe whatever preposterous words or actions these sites ascribe to her. In February 2013, the Washington Post’s Suzy Pakrer bit on a story claiming the Palin had joined Al Jazeera. In March of this year, liberals on Twitter swallowed the story that Palin had said Malaysia Flight 370 “flew too high” and “got stuck in heaven.”

Then there are the comments:

Rashawn Jefferson How in the hell was this dummy running to be the leader of the free world. Screw dodging a bullet, we dodged a cruise missile. ..

Meme Thisismyyear McCoy Her level of ignorance is epic…

But the best comment of all comes from someone posting as Jamielle Brown, who writes,
“LOL! What a dumb bitch. First she could see Russia from her house. And she thinks an ocean separates Mexico from the US! Lol!” Then, in the same breath, Brown adds, “Yea it’s a fake site I’m sure she didn’t say that but would it really surprise anyone if she did?” 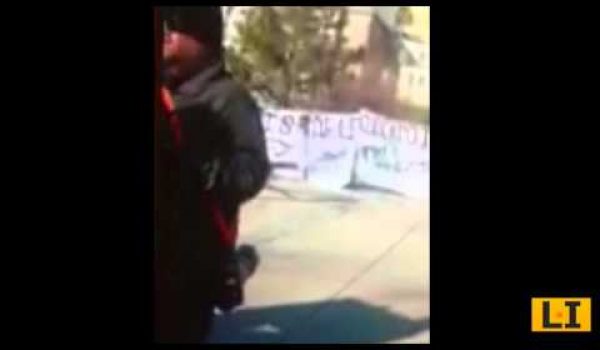