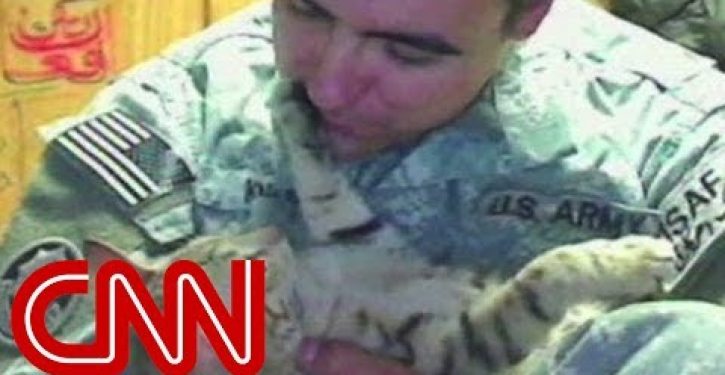 If you’re a dog fan, and a great admirer of military working dogs, you’ve come to the right place.

For good reason, there have been plenty of Veterans Day commemorations dedicated to the canine heroes who have served nobly alongside humans in the wars of the West.  Horses merit their special remembrances too, along with mules, donkeys, and pigeons.

Cats don’t come in as often for inspiring memorials, although they have served with military units — primarily to control vermin — for many years.

But Simon’s story is likely to stick with you.  Simon was a black and white tuxedo cat who served on the frigate HMS Amethyst (F116) in the Far East of the late 1940s.  Picked up by a crewman in Hong Kong in 1948, Simon won the hearts of the ship’s crew with his superlative mousing and gregarious ways.

In April of 1949, Amethyst was operating along the Yangtze River at the height of the Chinese civil war.  Mao’s forces, the People’s Liberation Army, fired on the frigate and immobilized it with serious damage, creating what came to be called the “Yangtze incident.”  Simon took shrapnel in the attack, and was missing for eight days, having crawled off alone to minister, as cats will, to his own wounds.  The crew feared he was dead.

But he turned up after those eight days, his back legs covered with blood, his whiskers burned off, and shrapnel still sticking out of him in various places.  As the ship’s crew worked to restore some of its systems, Simon was able, with a little stitching by a crewmember and a lot of licking of his wounds, to get back into action himself.

[T]he cat could hardly wait to get back to his military duties. The ship’s boilers and fans had shut down as a result of the onslaught, and the rats ran freely through the ventilation system; during Simon’s absence, they had infested food supplies, invaded living quarters, and made life a greater hell for surviving crew members.

Despite his injuries, Simon quickly got to business. His first night back, he had two confirmed kills, and within a few days’ time, he’d succeeded in clearing the deck of critters. But one foe remained: A gargantuan rat the crew had nicknamed “Mao Tse-tung.” For weeks, the scoundrel had avoided traps and gnawed his way through sealed food. Simon would have none of it. When the cat finally met his nemesis in the storeroom, he pounced, killed it, and proudly dropped it by the mens’ boots. From then on, the crew hailed him as “Able Seacat Simon” — the first (and so far, only) military title ever given to a feline.

Amethyst finally made her way out of the Yangtze in July 1949, Simon onboard and continuing his police duties while he cheered up the crew under conditions of tremendous stress.  When Amethyst got home to Britain, Simon was awarded the Amethyst campaign ribbon, authorized especially for the ship’s unique period of service, and was put in for the “Dickin” Medal, an award for valor given to animals serving with the British military.  (The Dickin Medal was inaugurated by an animal rescue advocate, Maria Dickin, in the 1940s, and quickly garnered the interest of the public and the king.)

Simon was awarded the Dickin Medal, but unfortunately, he died in quarantine before he could participate in a ceremony.  He is the only cat ever to receive the award.

For the rest of Simon’s story, see the post by Zachary Crockett at priceonomics.

For a more recent story of a cat in wartime, see the video below.