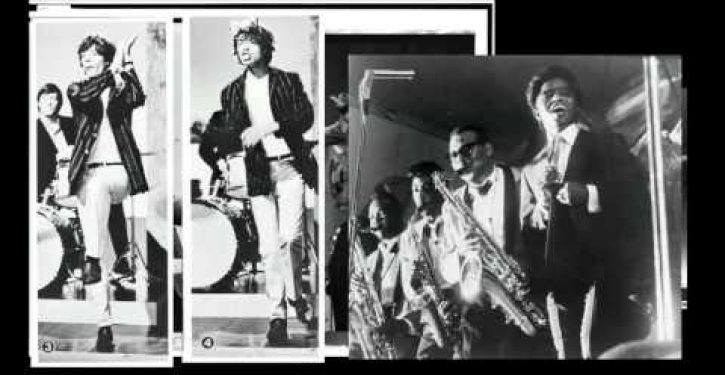 Twenty-five years ago today, on 9 November 1989, the Berlin Wall began to fall.  East German authorities announced that day that on the following day, 10 November, they would begin letting East Germans cross the border freely to visit West Germany.  East Germans surged into the streets and began swarming the Wall, as stunned border troops looked on, uncertain what to do.

Germans in the enclave of West Berlin surged into the streets as well.  As the East Germans started climbing the Wall, ripping at the concertina wire on top of it with their bare hands, the West Germans rushed the Wall and joined them.  Cameramen on scene couldn’t move fast enough to capture it all.  Westerners started lowering their Eastern brothers from the Wall to the ground.  The flood from the East became a tidal wave.

Within hours, Germans on both sides were at work on the Wall with sledgehammers and axes.  Great pieces of it started to topple.  Rarely in all history has a war’s final battle been fought in such a strange and dramatic way, but that’s what the fall of the Berlin Wall was: the Cold War’s last pitched battle.

Recognizing that is the key to the great underlying truth of the Cold War.  At its core, it wasn’t a war of East against West, Warsaw Pact against NATO, or even communist totalitarianism against capitalist democracy.  It was a war waged by totalitarian governments against their own people.  And the final battle was fought by the peoples of the communist countries against their brutal, repressive governments.

The East German communist regime didn’t know that it was going into to battle that day, 9 November 1989, when it announced the loosening of travel restrictions to West Germany.  It’s clear from the historical record that the leadership made no preparations for the people’s reaction.  The regime thought the people would wait until the 10th and form queues: make orderly visits through an unchanged string of border checkpoints over which the regime would continue to exercise an absolute, if somewhat more benign, control.

But the people had been in war-time mode all their lives – that’s how people live, under totalitarian governments – and they knew a pitched battle when they saw one.  They fought with what they had: their numbers, their feet, their hands, their voices.  And they prevailed.

Two observations about this event, and about our retrospective view from 2014, converge to illuminate where we are 25 years later.

Leaders who no longer believe in freedom

One is how significantly the ceremonial aspect of commemorating the fall of the Wall has dwindled, just in the last five years.  In 2009, the nations of Europe staged a big turnout in Berlin, with heads of state and government, speeches, a parade, thousands of marching troops and organizations.  To the dismay of many Americans, Barack Obama failed to go and represent our country for the event.

The political import of that choice – systematic with his administration and its policies – has colored and shaped the world since.  In 2014, the Germans themselves are naturally making a big deal of the anniversary.  But there’s no America this year, either, and the unity of Europe, as representative of an idea – of a civilization, beliefs, philosophy of right – is nowhere to be seen.

This is not only because the West’s anchor in North America is failing to perform its role.  That’s a big part of it, however.  And all the reasons why the West that won the Cold War can’t work up a good commemoration of the victory, a bare quarter-century later, trace to the same root.  Obama doesn’t go celebrate a victory for people’s freedom from government because he doesn’t believe in freedom from government.

He doesn’t buy the proposition – truly the West’s crowning philosophical achievement – that although human government is necessary, there are whole segments of life that should not be subject to its veto.  He doesn’t buy it, and increasingly, his fellow Western leaders don’t buy it either.

The sense that it would be futile for our leaders to celebrate a victory they don’t believe in is unspoken, to be sure.  But it’s palpable.  2014 represents a turning point: the anniversary that becomes less a commemoration of a global victory for freedom than a simple remembrance that’s mostly about the reunification of Germany.

The sound of freedom

But there’s another observation to make.  This one starts with an event in Los Angeles on Thursday, 6 November, for which I was a panelist – and with the documentary film that inspired it.  The documentary is Rockin’ the Wall, a movie made by Larry Schweikart and filmmaker Marc Leif (A Steady Rain) about the impact of rock and roll on the spirit of freedom in the communist East, and the eventual fall of the Wall.

The film is well worth seeing (it drew me in with an early passage comparing the quintessentially American musical forms of country, blues, jazz, and rock).  The event in LA, at which we viewed the film and then had a panel discussion afterward, was wonderful.  But I want to frame one special aspect of it that sparked a memory and a fresh understanding for me.

In 1989, Western intelligence services followed the events in Eastern Europe, including East Germany, for months before 9 November.  On the “East German Mondays” that erupted in the weeks before that day, East Germans flooded the streets in the major cities, staging mass demonstrations.  When I saw Rockin’ the Wall, I remembered a report from the time of a lone German who came out on a balcony during one of the demonstrations with an electric guitar, and galvanized the crowd with it.  It seemed that the crowd was so thick, the police couldn’t make their way through it to shut the guitarist down.  Watching from the intelligence centers in the West, we perceived then that what was happening was something new and probably unstoppable.

The kernel of that thought – one guitar – brought to mind the Foreigner song “Jukebox Hero.”  In light of the message of Rockin’ the Wall, and of the lone guitarist on an East German Monday, the recurring theme of “Jukebox Hero” – one guitar – is more than an anthem of youth or musical passion.  It’s an emblem of how the idea of freedom spoke to the people under communism.

Undoubtedly, the organized policy and corporate arrangements of the West made a difference during the Cold War.  Speeches, academic treatises, government programs, edited media – journalism, opinion, radio, TV, film: all of these were important.  But it was the thumping power of the un-edited, the un-organized – the one guitar that enabled one heart and mind to speak to the entire world, unfiltered – that gave teeth to a vision of freedom as it ate its way into the minds and hearts of the people behind the Iron Curtain.

That one guitar was something that could not come from the planning rooms of corporate organization.  Only the individual heart and mind could envision it, and – almost inadvertently, perhaps – make it matter.

The voice of the one guitar

The superb thinker Mark Tapson was one of our panelists, and he pointed out the importance to the world of not letting our American culture be ruled by anti-liberal, anti-American themes, as too much of it is now.  He’s quite right about that.  But the genius of the one guitar is that it blows right past the editorial gatekeepers of the culture to communicate something those gatekeepers can’t silence.

During the Cold War, many in academia, journalism, and the entertainment industry tried to paint a picture of America as ugly, brutal, and predatory.  But what the peoples of the East heard was the one guitar.  That one guitar was the sound of freedom: expression unfiltered; disciplined and hard-working, to be sure, but spontaneous and improvisational; accessible to anyone with a dream.

America was the place that wasn’t organized to repress it.  As hard as Hollywood and the mainstream media tried, they couldn’t fool the people living under communism.  For those people, America, and in a larger sense, the free West, was the land of that one guitar.

Here’s the point that brings this meditation full circle.  No one could foresee how the spontaneous musical expression of a pop-culture society would teach freedom to the soul of another people.  Americans themselves were ambivalent about rock and roll, even as it was surging from one commercial success to the next.  The phenomenon couldn’t have been organized; no one would have thought of it.  It had to arise unbidden, and thrive, because Americans were free.

Whatever it will take to teach freedom to the souls of people today, whether they are being subjected to radical Islamism or to some lingering version of 20th-century collectivist ideology, that “sound of freedom” quantity will come unprompted from the people whose minds and hearts are still free.  It can’t be identified and extracted from them like a serum, nor delivered by organized governments.

Maybe the Internet is today’s one guitar, or at least its vehicle.  Maybe it’s something we can’t see the outlines of yet.  Regardless, what we must know for organizational purposes is this. Freedom must be honored and protected, for freedom’s sake – because we can’t prescribe exactly what will come of it, but can only be sure it will be good.

The Democrats’ problem is the white voter
Next Post
Iraq: Mission creep?