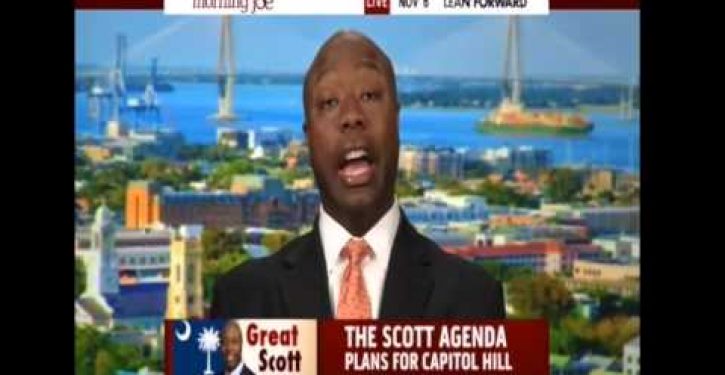 MSNBC host Thomas Roberts asked U.S. Sen. Tim Scott (R-SC), who became the first African American to be elected to both chambers of Congress, how he could possibly be both a Republican and serve the black community. Not only was Scott’s answer spot-on, but it was proven correct the following day when the Bureau of Labor Statistics posted its latest jobs report.

“You say you’re concerned about kids that are growing up in the wrong zip code and, like yourself, had a tough start on the way out,” Roberts said. “But if we look at agencies that are following some of your voting records, they have concern. And the NAACP has given you an ‘F’ on their annual scorecard.”

Scott laughed off the NAACP grade as though it didn’t matter–which it doesn’t.

“Let’s just ask ourselves, if we look back over the history when Congress was controlled by the Democrats for 40 consecutive years, if we look at the result of that control, what has happened in black America? We saw greater poverty,” the senator replied.

Scott then explained how wealth and prosperity are created–and how they’re not. He said, according to the Washington Examiner:

[I]f I have an ‘F’ on the NAACP’s scorecard, it’s because I believe that progress has to be made and the government is not the answer for progress. I was a kid growing up in poverty. I had a mentor who was a Chick-fil-A operator … who taught me that the brilliance of the American economy happens through business ownership and entrepreneurial spirit,

Watch the exchange, via the Examiner. Story continues below clip.

Scott’s MSNBC appearance occurred Thursday. On Friday, the Bureau of Labor Statistics came out with its monthly employment report.

Although “the employment picture for all Americans aged 16 and older improved from September to October,” the same couldn’t be said of African Americans, despite all the federal anti-poverty programs put in place, according to CNS News, which reported:

It’s always exhilarating watching a conservative give an on-point, fireball answer to a taunting question. It’s even better when the answer is confirmed — the very next day.