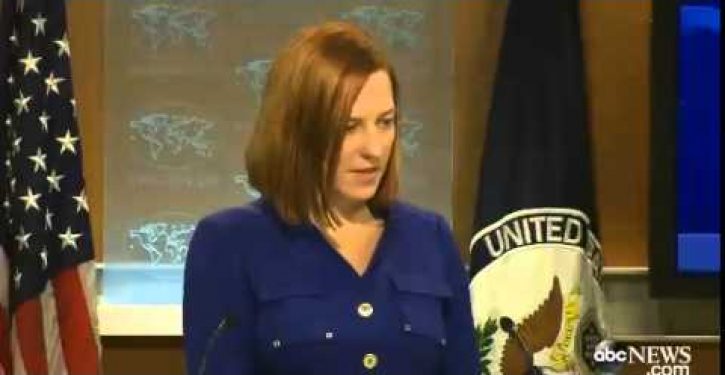 At a State Department press briefing Friday, department spokesperson Jen Psaki implied that the Obama administration was more versed in what is militarily possible than U.S. Army Gen. Martin Dempsey, who serves as the Chairman of the Joint Chiefs of Staff.

Psaki stated that Israel didn’t do all it could have to prevent collateral damage to civilian populations during the recent outbreak of war between it and Hamas forces in Gaza.

Associated Press reporter Matt Lee pointed out that Dempsey claimed Israel went to “extraordinary lengths” to prevent civilian deaths during the conflict. Also in support, Lee observed that the International Criminal Court ruled Thursday “there was no case to prosecute for war crimes in Gaza.”

But apparently the Obama administration knows best what is possible militarily. According to Psaki, Israel could have done more. Watch the last part of the exchange, via The Washington Free Beacon. Transcript of the full exchange appears below clip.

Transcript via SooperMexican on The Right Scoop:

MATT LEE: Yesterday, the ICC made its decision that there was no case to prosecute for war crimes in Gaza. But also yesterday – and you spoke about that very briefly here. But also yesterday, General Dempsey, who is no slouch when it comes to military things, told an audience in New York that the Israelis went to extraordinary lengths to limit collateral damage during the Gaza war.

And I’m puzzled, because I thought it was the position of the Administration – or maybe it was just the position of the State Department and the White House – that Israel was not doing enough to live up to its – what you called its own high standards. Back on August 3rd, there was the statement you put out after the UNRWA school incident, saying that the U.S. “is appalled by today’s disgraceful shelling.” And that was some pretty fierce criticism.

How do you reconcile these two apparent divergent points of view? When this statement came out, the United States was appalled? Did that just mean the State Department was appalled?

JEN PSAKI: No, that is the position of the Administration; it remains the position of the Administration. As we made clear throughout the summer’s conflict, we supported Israel’s right to self-defense and strongly condemned Hamas’s rocket attacks that deliberately targeted civilians, and the use of tunnels, of course, of attacks into Israel. However, we also expressed deep concern and heartbreak for the civilian death toll in Gaza and made clear, as you noted in the statement you pointed to, that we believed that Israel could have done more to prevent civilian casualties, and it was important that they held their selves to a high standard. So that remains our view and position about this summer’s events.

LEE: — says that the Israelis essentially did the best that they could and lived up to – by extension lived up to their high standards by taking – by going to, quote, “extraordinary lengths” to limit the collateral damage.

PSAKI: Well, I would point you to the chairman’s team for his – more specifics on his comments. But it remains the broad view of the entire Administration that they could have done more and they should have taken more – all feasible precautions to prevent civilian casualties.

Israel, our only true ally in the Middle East, should be afforded every benefit of every doubt. Instead, the Obama administration saves that privilege for our enemies.