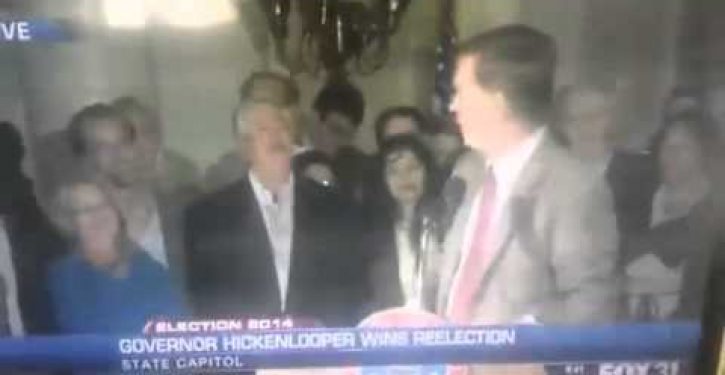 Colorado Gov. John Hickenlooper, who was one of the Democrats spared during the Republican house cleaning on Tuesday, was upstaged by his own outgoing chief of staff during his election night victory speech when she was caught on live TV giving a double-fisted flip of the bird.

In a spontaneous and clearly joking gesture, Roxane White appeared to give the newly re-elected governor the middle finger of both hands while he stood at the podium with his back turned to her.

Hickenlooper was in the middle of praising her work as a member of his staff since 2009, but White — who is leaving her job for the private sector — was likely reacting to cheers from fellow staffers of “four more years,” encouraging her to stay, according to Denver magazine Westword.

“That was her saying, ‘I really love you guys, I’m really going to miss you guys,’” Hickenlooper’s media adviser Maximillian Potter told the Durango Herald.

White, a social worker and ordained minister, announced in June that she would be leaving the governor’s office after the election to become the CEO of the Nurse-Family Partnership, a programs run by the nonprofit Invest In Kids. She told Denver’s Fox 31 at the time:

I am excited to be leaving one amazing job for an equally inspiring role as CEO of Nurse-Family Partnership, an evidence-based, cost-effective program that improves pregnancy outcomes, improves child health and development, and improves the economic self-sufficiency of the family.

Hickenlooper scraped his way to reelection in a tight race against Republican Bob Beauprez, who only conceded defeat the following day.

White has been with Hickenlooper since he was mayor of Denver and is part of his trusted inner circle.

“Roxane is in a league of her own, practically superhuman, when it comes to her energy, her compassion, and her commitment for serving others,” Hickenlooper said in a statement when she announced her plans in June.

DC veteran journalist claims Obama is ‘least political president in modern U.S. history’
Next Post
Rumors fly that Obama has decided on Loretta Lynch, who is black and female, as U.S. AG *UPDATE*